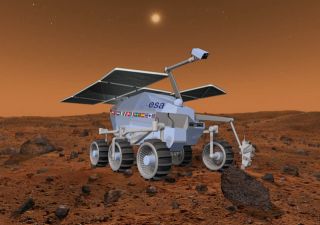 The European Space Agency’s ExoMars rover is due to launch toward the Red Planet in 2018. In this artist’s view, note the ExoMars robotic arm and drill.
(Image: © ESA/AEOS – Medialab)

According to the White House's 2013 budget request, NASA would receive about $17.7 billion for next year — $59 million less than the space agency got for 2012.

However, NASA's planetary science efforts would suffer a 20 percent cut next year, with the president allocating just $1.2 billion for unmanned missions to Mars and other solar system bodies. Meanwhile, funding for human exploration and commercial spaceflight would rise nearly 6 percent, to $3.93 billion, and space technology would get a 22 percent bump, to $699 million.

"We are having to make tough decisions, because these are tough economic times," NASA chief Charlie Bolden told reporters today. "We are doing all that we can to be fiscally responsible."

The reduction in planetary science funding compels NASA to drop out of the European Space Agency-led ExoMars missions, which aim to launch an orbiter and a drill-toting rover to the Red Planet in 2016 and 2018, respectively. NASA was due to provide rockets and various instrumentation for the two missions, but Bolden confirmed today that NASA will withdraw from both of them.

These two missions are viewed as key steps along the path toward a Mars sample-return mission, which many researchers regard as the best way to search for signs of life on the Red Planet.

"Underpinning this is not committing to a long-term Mars program ending in a multibillion-dollar sample-return mission," said space policy expert John Logsdon, professor emeritus at George Washington University in Washington, D.C. "They don't want to head down that road." [NASA's 10 Greatest Science Missions]

The White House's proposed allocation for NASA in fiscal 2013 represents less than 0.5 percent of the overall federal budget request, which is $3.8 trillion.

Other NASA programs fare better than planetary science in the request for fiscal year 2013, which runs from Oct. 1, 2012, through Sept. 30, 2013. The space agency's Earth sciences program, for example, would receive $1.78 billion, slightly more than the president allocated in his fiscal 2012 budget request.

The White House also prioritizes space technology, as evidenced by the 22 percent increase requested in the 2013 budget proposal.

"The Administration's commitment to enhance NASA's role in aerospace technology development aims to create the innovations necessary to keep the aerospace industry — one of the largest net export industries in the United States — on the cutting edge for years to come," the White House wrote in a summary outlining the budget request.

The SLS and Orion, which are designed to carry astronauts to destinations in deep space such as asteroids or Mars, received $3 billion in fiscal 2012. NASA hopes the combo is operational by 2021.

Commercial space transportation gets a vote of confidence in the 2013 budget request. The president slotted $830 million for NASA's Commercial Crew Development (CCDev) program, NASA's effort to encourage American private spaceflight companies to start ferrying astronauts to and from the International Space Station.

Since the space shuttle retired in July 2011, NASA has been completely dependent on Russian Soyuz vehicles to perform this taxi service. The agency wants several different private spaceships to be up and running by 2017 or so. [Top Private Spaceships Headed for Reality]

NASA's planetary science funding is likely being slashed in part to help pay for the James Webb Space Telescope (JWST), a huge instrument that NASA bills as the successor to its Hubble Space Telescope.

JWST has suffered numerous cost overruns and delays over the years. Back in 2001, the National Academy of Sciences pegged the telescope's price tag at $1 billion. NASA's first official appraisal, performed in 2008, estimated a cost of $5 billion, with a launch coming in 2014.

The telescope is now slated to cost $8.8 billion, and to launch in 2018 at the earliest. The White House proposes giving JWST $628 million in fiscal 2013, compared to $519 million in the current year.

"Finishing Webb is being given a higher priority than starting or committing to new Mars missions," Logsdon told SPACE.com.

NASA officials stress that the agency is still committed to exploring Mars, both for scientific purposes and to enable future manned missions to the Red Planet. President Obama has directed NASA to get astronauts to Mars by the mid-2030s.

However, NASA has now decided to restructure its unmanned Mars strategy, to find cheaper, more efficient ways to meet these ends, Bolden said. The reassessment is a nod to the tough budget environment; it will likely be difficult to greenlight expensive flagship missions like the $2.5 billion Mars Science Laboratory — which is due to drop the 1-ton Curiosity rover onto the Red Planet's surface this August — anytime soon.

"We're talking about a fundamental change in the way we do business," Bolden said.