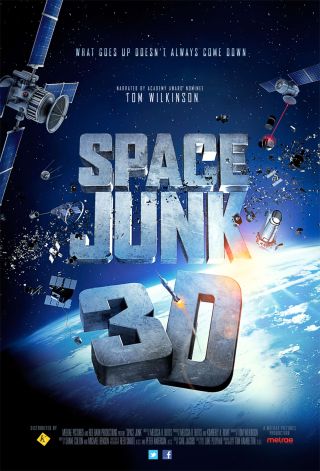 Russia's huge Phobos-Grunt Mars probe is the latest dead satellite to become space junk — the kind of trash clogging the orbital corridors around Earth that is the subject of a new 3D film soon to hit the big screen.

"Space Junk 3D" is set to open Jan. 13, an IMAX 3D movie crafted to spotlight the threat from human-made orbital rubbish. The film hopes to raise awareness of the increasingly worrisome debris dilemma — an educational step to help ensure the future of space exploration and satellite communications.

The Phobos-Grunt mission, a failed bid by Russia to collect samples from Mars' moon Phobos and return them to Earth, malfunctioned shortly after its launch Nov. 8, leaving it stranded in Earth orbit. Now it is due to fall back through our planet's atmosphere, mostly burning up, around the middle of this month.

"After half a century of space exploration we're now suddenly faced with what has long been a staple of science fiction ... an orbiting junkyard of cast-off space debris," notes popular British character actor Tom Wilkinson, who narrates the film.

Outer space is peppered with upper-stage rocket bodies weighing several tons. Adding to the mess is everything from paint chips to cast-off bolts, pieces from exploded rocket stages and other miscellaneous fragments.

It is estimated that low-Earth orbit contains 6,000 tons of space junk. And geosynchronous Earth orbit is home to 400 dead satellites, parked in higher graveyard orbits, where they will remain for hundreds of years.

"Space Junk 3D" is to be shown in science centers around the globe, with the movie's premiere scheduled for Jan. 13th at the Omnimax Dome in St. Louis.

In the film, a number of ideas for ridding space of leftover debris are showcased.

One idea is to use an electrodynamic tether that would de-orbit a spacecraft by generating drag through interactions between currents in the tether and the Earth's magnetic field. This increased drag would lower the spacecraft out of orbit until it re-enters the Earth's atmosphere.

Another scheme involves capturing debris with a space net, which, like the tether, could be powered using the Earth's magnetosphere. Also, lasers are highlighted that could one day sweep space, slowing down smaller objects and causing them to tumble into the atmosphere. [How Much Junk is in Space?]

In addition, solar sails could someday be a part of newly launched satellites, a resource held in reserve and ready to help spacecraft de-orbit once their work above Earth is completed.

As for spacecraft tumbling out of orbit, they burn up in the atmosphere regularly. However, not all spacecraft-related pieces perish upon re-entry and can reach the Earth's surface at very high speeds. Luckily, 70 percent of the Earth's surface is water, greatly reducing the chances that a piece of space junk will descend into a populated area.

A story consultant featured in "Space Junk 3D" is Don Kessler, retired senior scientist for NASA's Orbital Debris Program — viewed by many as the "father of space junk."

"It isn't a coincidence that media headlines of falling debris are growing just as we launch this film," Kessler said in a statement. "As we started researching this story we found that most scientists agree we've reached this tipping point where orbital debris will continue to grow exponentially if we don't address the problem."

Decades ago it was Kessler who published a landmark paper, "Collision Frequency of Artificial Satellites," detailing the science behind what is now unofficially known as the "Kessler Syndrome." That space-based disorder describes how space junk collides with other space junk, resulting in more and more fragments, until the debris eventually renders low-Earth orbit impassable.

Kessler said that the new film can help educate the public and world leaders, too.

"I feel like we suffer from such a lack of understanding of what the real issues are … and what we need to do in order to solve those issues," Kessler said. "And I think we get the false impression that if we put these things off and wait until we have more money or are more capable of doing it…that there's justification for that. Understanding the issues of orbital debris now — today — will make it possible for solving the problems before they get any worse."

"I hope that people take away from this film that there are consequences to our actions," said Melissa Butts, the movie's director.  "On the flip side of that, where there is a will, there is a way. We haven't quite figured out how we're going to clean it up yet, but I believe — and the film says this pretty clearly — there is a will to make it better. I expect that young people watching this film in various parts of the world will be integral in finding a long-term solution."

"Space Junk 3D" is presented by Melrae Pictures, an award-winning creator of 3D and 2D entertainment for theatrical, broadcast, Internet and mobile distribution. The movie was produced by Melissa Butts and Kim Rowe.

The 38-minute film is available in both 3D and 2D, for giant screen and digital t-eaters.

To view the trailer and check theater showings, as well as gain access to other resources such as a K-12 Educator's Guide to orbital debris, visit: http://www.spacejunk3d.com