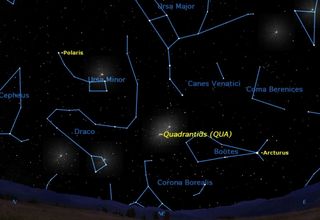 If you enjoy the sight of "shooting stars" then make plans to be out looking skyward during the predawn hours on Wednesday (Jan. 4) when a strong display of Quadrantid meteors may appear. This first meteor shower of the year may end up being one of the best of 2012.

To paraphrase Forrest Gump: The Quadrantid meteor shower is like opening up a box of chocolates; you never know what you're going to get!  Indeed, the Quadrantids are notoriously unpredictable, but if any year promises a fine display, this could be it.

Peak activity is due to occur early on Wednesday at about 2:30 a.m. EST (0730 GMT) and favors eastern North America. The Quadrantid meteor shower sky map above shows where to look to see the display.

The Quadrantids (pronounced KWA-dran-tids) provides one of the most intense annual meteor showers, with a brief, sharp maximum lasting but a few hours. Adolphe Quetelet of Brussels Observatory discovered the shower in the 1830s, and shortly afterward it was noted by several other astronomers in Europe and America. [First Photos: The 2012 Quadrantid Meteor Shower]

The meteors are named after the obsolete constellation Quadrans Muralis the Mural or Wall Quadrant (an astronomical instrument), depicted in some 19th-century star atlases roughly midway between the end of the Handle of the Big Dipper and the quadrilateral of stars marking the head of the constellation Draco. The International Astronomical Union phased out Quadrans Muralis in 1922.

Unfortunately, many factors combine to make the peak of this display difficult to observe on a regular basis:

It is not surprising then, that the Quadrantids are not as well-known as some of the other annual meteor showers, but 2012 may prove to be an exception. [12 Must-See Skywatching Events in 2012]

According to Robert Lunsford of the American Meteor Society, maximum activity this year is expected on Wednesday morning, Jan. 4 at 2:30 a.m. EST (0730 GMT).

Although the moon will be at a bright waxing gibbous phase, it will set by 3 a.m., leaving the sky dark for prospective meteor watchers until the first light of dawn appears at around 6 a.m.

Quadrantid meteors are described as bright and bluish with long silvery trains. Some years produce a mere handful, but for favorably placed observers, this could be a shower to remember; at greatest activity, according to Lunsford, "Eastern observers may be able to see 60-75 Quadrantids per hour." [Amazing meteor shower photos]

"If your skies are very clear and dark, allowing you to see faint meteors, your rates could top 100 per hour. Observers located in the western portions of North American will have lower rates but will also have the opportunity to see Quadrantid 'earthgrazers,'" Lunsford added. "Earthgrazers are meteors that skim the upper portion of the atmosphere therefore lasting much longer than normal and producing long trails in the sky. These meteors can only be seen when the radiant lies close to the horizon. As the radiant rises, the meteor paths will become shorter with shorter durations."

Don't forget to bundle up!

Finally, so far as weather conditions are concerned, a large high pressure system is expected to dominate the weather across much of the eastern United States and Canada for the peak of the shower meaning skies for these areas should be mainly clear for prospective meteor watchers.

However, it is also expected to be unseasonably cold (perhaps "unreasonably" is a better term to use!), with sub-zero readings possible over parts of upstate New York and New England with sub-freezing temperatures possible down into the Deep South. As one astronomer said prior to a mid-winter meteor watch: "Take the advice of a man whose teeth have chattered on many a winter's night — wrap up much more warmly than you think is necessary!"

You can also watch the Quadrantid meteor shower online via this NASA website: http://www.nasa.gov/topics/solarsystem/features/watchtheskies/quadrantids_2012.html

Editor's note: If you snap an amazing photo of the Quadrantid meteor shower would like to share it with SPACE.com, contact managing editor Tariq Malik at tmalik@space.com.