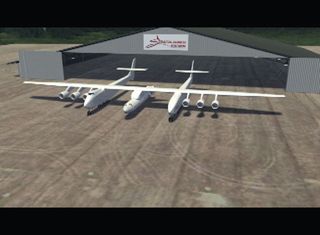 A video still by Stratolaunch Systems, which claims its system will minimize weather and range constraints.
(Image: © Stratolaunch)

Microsoft co-founder Paul Allen's new spaceflight venture shouldn't come as a big surprise, because the billionaire has set his sights on the heavens before.

Allen announced today (Dec. 13) that he is forming a new company called Stratolaunch Systems, which plans to launch payloads to orbit from a huge plane at high altitude. Stratolaunch Systems continues a trend for Allen, who has funded several different spaceflight and astronomy efforts over the years.

These ventures are the natural outgrowths of a lifelong fascination with space, said Allen, who as a boy dreamed of becoming an astronaut.

"For me, the fascination with space never ended, and I never stopped dreaming about what might be possible," Allen said during a press conference in Seattle today. [Images: Paul Allen's Giant Airplane Launch Pad]

The air-launch concept behind Stratolaunch Systems is similar to that of SpaceShipOne, which won the $10 million Ansari X Prize for suborbital spaceflight in 2004.

The design of SpaceShipOne and its mothership, the White Knight, later became the basis for Virgin Galactic's commercial spaceliner SpaceShipTwo, which may begin carrying tourists to suborbital space as early as next year.

The similarity between the two projects is no coicidence. SpaceShipOne was a joint venture between Allen — who reportedly invested more than $20 million in the effort — and Scaled Composites, a California firm headed by aerospace engineer Burt Rutan.

Now, Rutan will serve on the board for Stratolaunch Systems, and Scaled will develop the new company's gigantic airplane mothership.

The multistage rocket booster used by Stratolaunch will be built by the California-based company Space Exploration Technologies, better known as SpaceX, officials said.

Since 2001, Allen's foundation has given about $29 million to develop and help build and operate the array, which researchers use to scan newly discovered alien planets for microwave signals that could indicate the presence of intelligent civilizations.

"Paul was brave enough to go out on a limb and fund all of our technology development work for three years, because this is a new kind of telescope that no one had built before," Jill Tarter, director of the Center for SETI Research at the SETI Institute, told SPACE.com. "He has been a very good partner."

The long-term plan is to expand the array to 350 telescopes. Allen never intended to fund this larger array all by himself; he wanted some partners to come in and help out, Tarter said. That hasn't happened yet, so the SETI Institute is pressing forward with the 42 telescopes for now.

Allen also established the Science Fiction Museum and Hall of Fame, which opened in Seattle in 2004. His scientific interests aren't limited to spaceflight and exploration, however; they're very broad, and Allen has helped fund major research efforts in genetics, medicine and neuroscience, among other fields.

"I'm a huge fan of anything that pushes forward the boundaries of what we can do in science and technology," Allen said. "That's my history. Those are my passions."