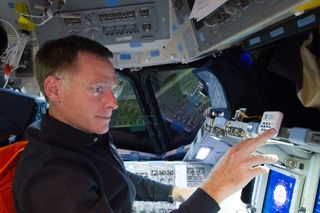 Astronaut Chris Ferguson, STS-135 commander, is pictured at the commander's station on the forward flight deck of the space shuttle Atlantis during the STS-135 mission's third day in space
(Image: © NASA)

The last astronaut to command the space shuttle is retiring from NASA, the space agency announced today (Dec. 5).

Astronaut Chris Ferguson, who commanded the final mission of NASA's 30-year space shuttle program in July, will retire from the space agency on Friday (Dec. 9).

According to NASA, Ferguson is leaving to accept a new job in the private sector.

"A tough decision to leave folks, but good things await... and I get to stay in the business," Ferguson wrote on Twitter soon after his pending departure was announced today.

Neither NASA nor Ferguson revealed where he would be working next.

"Chris has been a true leader at NASA, not just as a commander of the space shuttle, but also as an exemplary civil servant, a distinguished Navy officer and a good friend," NASA Administrator Charles Bolden said in a statement. "I am confident he will succeed in his next career as he brings his skill and talents to new endeavors." [Photos: NASA's Last Shuttle Mission in Pictures]

An astronaut since 1998, Ferguson first flew in space as the pilot of shuttle Atlantis on the STS-115 mission in 2006. During the flight, he and his crewmates delivered portions of the International Space Station's backbone to extend the outpost's truss structure.

Ferguson next commanded shuttle Endeavour in 2008. During that STS-126 mission, Ferguson and his crew delivered water recycling and habitation hardware to the station, and dropped off a new long-term resident for the orbiting laboratory, bringing home the astronaut she replaced.

His third and last flight to space was also the final mission for the space shuttle program. During the 13-day STS-135 mission, Ferguson and his crew delivered approximately 10,000 pounds of supplies and spare parts to the space station to help outfit it for the post-space shuttle era.

On the ground, Ferguson served as a spacecraft communicator, or capcom, in Mission Control, and from November 2009 to September 2010, was deputy chief of the Astronaut Office at the Johnson Space Center in Houston.

"Chris has been a great friend, a tremendous professional and an invaluable asset to the NASA team and the astronaut office," Peggy Whitson, chief of the Astronaut Office, said. "His exceptional leadership helped ensure a perfect final flight of the space shuttle, a fitting tribute to the thousands who made the program possible."

In addition to his formal roles in the Astronaut Office, Ferguson also played the drums in the all-astronaut band "Max Q."

Since landing shuttle Atlantis on July 21, Ferguson and his STS-135 crewmates completed a tour of NASA facilities and public venues to share their mission stories and express their thanks to those who helped make the mission — and the shuttle program — a success. Their tour ended last month with a visit to the White House and then a photo shoot with the crew of the first shuttle mission.

"We're done," Ferguson told the Houston Chronicle in early November. "Everyone goes their separate ways right now. From the crew office standpoint, the shuttle program is over."

Ferguson’s departure from NASA follows a number of his fellow shuttle astronauts who have left over the past few months, including Steven Lindsey and Mark Kelly, who commanded the final flights of shuttles Discovery and Endeavour, respectively.

To compensate for these departures and to meet the needs of the International Space Station and other post-shuttle space exploration programs, NASA began recruiting for a new class of astronaut candidates on Nov. 15. The space agency expects to hire between nine and 15 new trainees by March 2013.

These astronauts will continue to ride to the space station aboard Russian Soyuz spacecraft, until a commercial American vehicle is ready to fly them. The new astronaut class could also be among the first people to fly on NASA's planned missions to an asteroid in 2025 and to Mars in the mid 2030s.