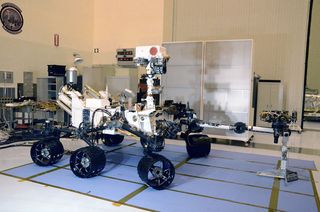 Editor's Note: The following timeline was updated on March 8, 2016.

Getting to Mars has never been easy. In the time that humans have been sending probes to Mars, there have been devastating failures and incredible successes. Here's a timeline of all the attempted Mars missions — including orbiters, landers and rovers — by various space agencies.

Marsnik 1: USSR, launched Oct. 10, 1960 on an intended Mars flyby. The spacecraft did not reach Earth orbit.

Marsnik 2: USSR, launched Oct. 14, 1960 on an intended Mars flyby. The spacecraft did not reach Earth orbit.

Mariner 3: U.S., launched Nov. 5, 1964 on an intended Mars flyby. The shroud encasing the spacecraft at the top of the rocket failed to jettison.

Zond 2: USSR, launched on Nov. 30, 1964 on an intended Mars flyby. The spacecraft passed Mars but its radio failed and it did not return any planetary data.

Mars Odyssey: U.S., launched March 7, 2001. The Mars orbiter arrived on Oct. 24, 2001 and is currently conducting its extended science mission. The spacecraft has returned about 350,000 images, mapped global distributions of several elements, and relayed more than 95 per­cent of all data from the Spirit and Opportunity rovers.

Mars Express/Beagle 2: European Space Agency, launched June 2, 2003. The Mars orbiter complet­ed its prime mission in November 2005 and is currently on an extended mission. The lander was lost on arrival on Dec. 25, 2003.

Mars Exploration Rover Spirit: U.S., launched June 10, 2003. The Mars rover landed on the Red Planet on Jan. 4, 2004 for three-month mission to look for signs of past water activity on Mars. Ground controllers lost communication with Spirit in March 2010, and repeated attempts to awaken the rover failed. The rover far outlived its intended warranty, but NASA declared Spirit dead in May 2011.

Mars Exploration Rover Opportunity: U.S., launched July 7, 2003. The Mars rover landed on Jan. 25, 2004 for a three-month prime mission in the Meridiani Planum region. The rover has currently logged more than 20 miles on the Red Planet and is now investigating the huge Endeavour crater. [Mars Explored: Landers and Rovers Since 1971 (Infographic)]

Mars Reconnaissance Orbiter: U.S., launched Aug. 12, 2005. The Mars orbiter began orbiting the planet on March 12, 2006. The spacecraft has provided data that include more than 25,000 images and 3,500 radar observations. The mission has returned more total data than produced by all previous Mars missions combined.

Phoenix Mars Lander: U.S., launched Aug. 4, 2007. The Mars lander touched down on May 25, 2008 and dug through Martian soil to confirm the presence of water ice beneath the surface. Phoenix's solar panels suffered severe damage from the harsh Martian winter, and communication with the $475 million lander was lost in November 2008. After repeated attempts to reestablish contact, NASA declared Phoenix broken and dead in May 2010.

Phobos-Grunt: Russia, launched Nov. 8, 2011 on a mission to the Mars moon Phobos. The $163 million Phobos-Grunt spacecraft's thrusters failed to fire in a maneuver that would have sent the spacecraft on to Mars. It became stuck in Earth orbit, and crashed into the Pacific Ocean on Jan. 15, 2012.

Mars Science Laboratory: U.S., lanched Nov. 26, 2011. The $2.5 billion Curiosity rover landed at Gale crater on Aug. 5, 2014. The rover is carrying 10 instruments that will enable it to dig, drill and analyze the composition of rock samples. Go here to read about Curiosity's biggest science discoveries so far.

Mars Atmosphere and Volatile Evolution (MAVEN): U.S., launched Nov. 18, 2013. The $671 million Mars orbiter was launched primarily to study the Martian atmosphere. Arrived at the Red Planet on Sept. 21, 2014. MAVEN is helping scientists understand how Mars lost most of its ancient atmosphere.

ExoMars Program: Europe and Russia, consists of two missions. First mission (orbiter and lander) scheduled to launch March 14, 2016. The Trace Gas Orbiter (TGO) will study the planet from above, while a small lander called Schiaparelli will test landing technologies. The second mission, scheduled to launch in 2018, consists of a rover that will drill 6.5 feet (2 meters) into the Martian soil. The combined cost of the program is about $1.6 billion.