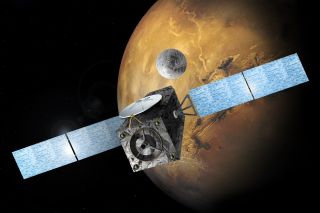 The next robotic mission to Mars will launch in less than a week, if all goes according to plan.

The first part of the two-phase, joint European-Russian ExoMars mission is scheduled to blast off atop a Russian Proton rocket from Baikonur Cosmodrome in Kakakhstan on March 14. A slight delay can be accommodated; the launch window extends through March 25.

The Proton's payload consists of the Trace Gas Orbiter (TGO) and a lander called Schiaparelli, both of which should arrive at Mars in October after a seven-month cruise. TGO will sniff the Red Planet's air from orbit using four scientific instruments, hunting for possible signs of life. [Gallery: Europe's ExoMars Mission in Pictures]

"The orbiter will perform detailed, remote observations of the Martian atmosphere, searching for evidence of gases of possible biological importance, such as methane and its degradation products," European Space Agency (ESA) officials wrote in a mission description.

"The instruments on board the orbiter will carry out a variety of measurements to investigate the location and nature of sources that produce these gases," the officials added. "The scientific mission is expected to begin in December 2017 and will run for five years."

TGO will also map subsurface hydrogen to a depth of 3.3 feet (1 meter), an effort that could reveal accessible deposits of water-ice on Mars; this information could, in turn, guide the choice of landing sites for future missions, ESA officials have said.

Schiaparelli, meanwhile, is an entry, descent and landing demonstrator designed to help lay the foundation for the second part of the ExoMars mission, which will launch a life-hunting rover toward the Red Planet in 2018 or 2020. (TGO will serve as the communications link between this rover and mission control.)

Schiaparelli will also gather environmental data on the Martian surface for as long as the probe's batteries last, likely between two and eight days, ESA officials have said.

NASA was ESA's original partner on ExoMars, whose name is short for Exobiology on Mars. But the American space agency dropped out in February 2012, citing budget issues. About a year later, ESA signed a deal with Roscosmos, the Russian federal space agency, to pick up the slack.

ESA leads the ExoMars mission and is responsible for most of the spacecraft hardware. Russia is providing several components: Proton rockets for both launches, the lander that will deliver the ExoMars rover to the planet's surface, and some scientific instruments on TGO and the rover.

ExoMars is Europe's second Red Planet mission. The first was Mars Express, which consisted of an orbiter and a lander that launched together in June 2003. The orbiter continues to study the planet to this day, though the lander, known as Beagle 2, went silent shortly after separating from the Mars Express mothership. It was never heard from again.

After a long search, Beagle 2 was finally spotted in January 2015, in images captured by NASA's Mars Reconnaissance Orbiter. These photos showed that Beagle 2 made it to the Martian surface intact; the lander may have failed because its solar panels didn't deploy completely, mission team members have said.