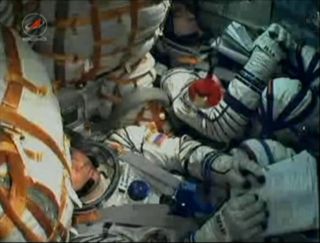 NASA astronaut Dan Burbank and Russian cosmonauts Anton Shkaplerov and Anatoly Ivanishin are pictured inside their Soyuz TMA-22 spacecraft minutes prior to their launch to the International Space Station.
(Image: © NASA TV)

Three spaceflyers are expected to arrive at the International Space Station early Wednesday (Nov. 16), where they will begin a months-long mission aboard the orbiting outpost.

After a two-day journey in orbit, NASA astronaut Dan Burbank and Russian cosmonauts Anton Shkaplerov and Anatoly Ivanishin are scheduled to reach the space station at 12:33 a.m. EST (0533 GMT).

The trio will dock their Russian-built Soyuz TMA-22 capsule to the Poisk module on the Russian segment of the orbiting complex. After conducting a series of leak checks, the spaceflyers will open the hatches between the two spacecraft at around 3:45 a.m. EST (0845 GMT).

Burbank, Shkaplerov and Ivanishin launched into orbit on Nov. 13 (Monday, Nov. 14 local time) from the Baikonour Cosmodrome in Kazakhstan. Despite heavy snowfall and frigid temperatures, the rocket lifted off on time and without incident from the Central Asian launch site.

Fossum and his two crewmembers have been residents at the space station since June, but will only spend a few days with their new roommates. Fossum, Furukawa and Volkov are scheduled to return to Earth on Nov. 21.

Prior to departing from the orbiting complex, Fossum will transfer command of the space station to Burbank, who will lead the new Expedition 30 mission for the duration of his stay.

While this is Burbank's first long-duration trip to the space station, he has visited the outpost twice before. The veteran astronaut was a crewmember on the STS-106 mission in 2000 and STS-115 mission in 2006, both aboard the space shuttle Atlantis.

Shkaplerov and Ivanishin are both making their spaceflight debuts. The three newest station residents will remain at the massive orbiting complex until March 2012.