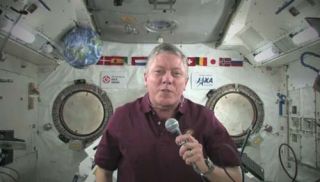 The American in charge of the International Space Station has sent U.S. veterans a video tribute to honor their military service and sacrifices for Veteran's Day today (Nov.  11).

"Much like our brave servicemen and women serving across the globe, we're far from home, from family and friends, conducting a very important mission in a hostile environment," Fossum said. Space station astronauts, like military veterans, work for the good of humankind while cooperating with international partners, he added.

Fossum is the commander of the space station's three-man Expedition 29 crew. An astronaut from Japan and a Russian cosmonaut round out the team. The trio will return later this month after handing  control of the station over to a new crew, which launches toward the orbiting lab on Sunday (Nov. 13).

"On behalf of our entire crew and a grateful America, we'd like to pay tribute to the thousands of soldiers, sailors, airmen and marines for your service across the globe in support of the cause of freedom," Fossum said. "Only through your defense of our great nation can we accomplish our worthy goals."

Fossum added that from his vantage point 230 miles up, the Earth is a spectacular sight.

"Our home planet is beautiful and breathtaking, with no borders visible to the naked eye. As we pause to remember those who gave their lives in pursuit of freedom, and those who defend that freedom everyday," he said. "We honor you, and we thank you." [10 Views of Earth From Space]

"NASA's connection to the military dates to the agency's founding, when so many of our early astronauts emerged from the military. Today, many of our NASA colleagues are still current or former members of the military," said Bolden, who is a retired Marine Corps major general, in a video message to agency workers. "Some of them have lost their lives in the cause of space exploration. And many others with NASA connections have also lost their lives in service to our great country."

Bolden said military veterans are not the only ones who make sacrifices for the good of the country. The family and friends of loved ones also demonstrate courage and dedication, he added. Bolden also lauded the Joining Forces Initiative launched by First Lady Michelle Obama and Dr. Jill Biden, wife of Vice President Joe Biden, to support veteran families.

"Even in peacetime, our veterans deserve our gratitude for their service and our welcome when they return home," Bolden said.