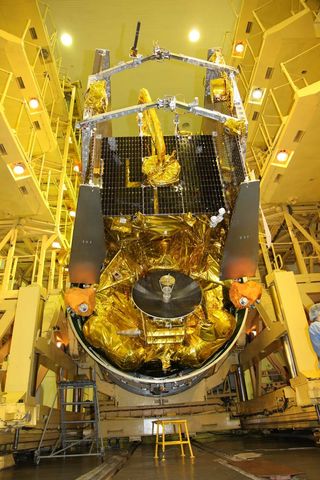 Russian engineers are scrambling to salvage a robotic Mars moon probe that is stuck in orbit around Earth, but are facing an uphill battle to get the spacecraft back on a path to the Red Planet before it becomes just another piece of space junk.

The Russian Phobos-Grunt spacecraft launched Tuesday (Nov. 8) and separated from its Zenit rocket as planned. But the probe's own thrusters failed to fire in a maneuver that would have sent Phobos-Grunt on a trajectory toward Mars, Russian space officials said.

Now the spacecraft, which is also carrying China's first Mars orbiter, is trapped in orbit as engineers race to solve the problem and save the mission. There have been some indications that Russian flight controllers are not able to communicate with Phobos-Grunt, which could mean that the problem is beyond repair, according to ABC News.

"I think we have lost the Phobos-Grunt," Vladimir Uvarov, a former space official at the Russian Defense Ministry, told the Russian daily Rossiyskaya Gazeta today (Nov. 10), according to ABC News. "It looks like a serious flaw. The past experience shows that efforts to make the engines work will likely fail."

There have been conflicting news reports as to how long the Russians have before the spacecraft's batteries run out, ranging from two days to two weeks. Yesterday, Russian Space Agency (Roscosmos) officials said they have two weeks to figure out how to ignite Phobos-Grunt's thrusters before the spacecraft is lost. [Photos: Russia's Mars Moon Mission]

The $163 million Phobos-Grunt mission aimed to grab bits of the Mars moon Phobos' surface and send it back to Earth by 2014. The ambitious flight marks Russia's first attempt at an interplanetary mission since 1996.

For now, Phobos-Grunt is in a safe, so-called parking orbit, and there is little danger of it colliding with other spacecraft or satellites, said Brian Weeden, a technical adviser at the Secure World Foundation, a nonprofit organization dedicated to the sustainable use of space.

If the Russians are unable to resolve the issue, however, the Phobos-Grunt spacecraft could be lost forever.

"It would become another piece of orbital debris, and it may actually be right now," Weeden said. "The question is: how much command and control do the Russians have?"

As Russian engineers scramble to save Phobos-Grunt, NASA and the U.S. military are closely monitoring the situation.

"The U.S. Space Surveillance Network is tracking without difficulty both the Phobos-Grunt spacecraft and its associated Zenit 2 second stage," Nicholas Johnson, chief scientist at NASA's Orbital Debris Program Office at the Johnson Space Center in Houston, told SPACE.com in an email. "This information is also available to Russian experts. NASA hopes that control of the spacecraft can still be achieved and that it can be sent on its proper path to Mars." [Video: Sampling Mars Moon Phobos]

If Phobos-Grunt cannot be saved, it will eventually fall back to Earth, Weeden said, but likely not within the two-week window that Russian officials appear to be working with.

"I think two weeks is too quick," Weeden said. "It all depends on its altitude, but also the size and shape of the object, because of the drag. I'm not too certain of that, but I would say that as a rough estimate, the lifetime is measured at several weeks to a few months at that altitude, but probably not much more than that."

Still, Weeden said there is no reason for the public to panic, even though the spacecraft is still full of fuel. If the probe cannot be saved, Russian flight controllers have the option of venting out the onboard fuel into space.

"They can vent it in orbit, and it's done all the time," Weeden said. "So, the only real risk there is, of course, if you vent the fuel on orbit, you're never going to get to Mars. So, it's really a mission impact decision."

Even if Phobos-Grunt were to fall back to Earth, the risk of the spacecraft landing in a populated area is very low, Weeden said. This is because majority of the planet is covered in water, and many land areas are desolate or unpopulated.

"Objects re-enter all the time," Weeden explained. "Odds are, if this thing — even if it's full of fuel and it re-enters — it will break up in atmospheric re-entry, which does not really pose a hazard. There's an extraordinarily small possibility, perhaps even impossible — and that would depend upon Roscosmos doing analysis — that it would survive re-entry intact. So, worst case scenario, it's just another piece of space debris."