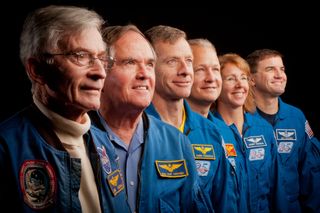 The first and last astronauts to fly on NASA's space shuttles met Nov. 2 in Houston to pose for a series of historic photographs.

John Young and Robert Crippen, who in April 1981 flew onboard space shuttle Columbia on its STS-1 mission, joined the final shuttle crew — STS-135 astronauts Chris Ferguson, Doug Hurley, Sandra Magnus and Rex Walheim — at NASA's Johnson Space Center. The six former and current astronauts united at the Space Vehicle Mockup Facility, where both crews had trained prior to their missions in the agency's full-scale shuttle mockups.

"This picture was important to me," Crippen said in an interview with the Houston Chronicle. "I thought it kind of gave us the bookends of the program."

For the "final four" who landed shuttle Atlantis for a final time in July, the photo op also marked an end to their time together as a crew since being assigned to train together in September 2010.

"We're done," Ferguson told the Chronicle. "Everyone goes their separate ways right now. From the crew office standpoint, the shuttle program is over."

NASA formally declared its 30-year space shuttle program completed on Aug. 31, more than a month after the STS-135 crew returned to Earth. Since then, the four have gone through post-flight briefings and toured around the nation to talk about their mission.

The day before meeting with Young and Crippen, the STS-135 crew met President Barack Obama at the White House, where they presented him with an astronaut blue flight jacket decorated with both the STS-1 and STS-135 emblems, among others.

The four astronauts also left both theirs and Young's and Crippen's patches on the International Space Station together with a U.S. flag that flew first on STS-1.

See more photos of the STS-1 and STS-135 astronauts together at collectSPACE.com.