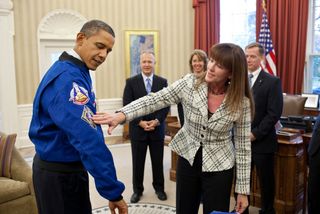 Janet Kavandi, Director of Flight Crew Operations at Johnson Space Center, presents President Obama with a jacket during a drop by with the crew of the Space Shuttle Atlantis in the Oval Office, Nov. 1, 2011. The jacket features patches from several past space shuttle missions. Pictured in the background, from left, are: Pilot Doug Hurley, Mission Specialist Sandy Magnus, Commander Chris Ferguson and Mission Specialist Rex Walheim.
(Image: © White House/Pete Souza)

The commander-in-chief, President Barack Obama, donned the jacket for a different type of commander while meeting with the astronauts who flew NASA's final space shuttle mission inside the Oval Office at the White House on Tuesday (Nov. 1).

The president's jacket displayed the embroidered patch for the final space shuttle mission, which landed in July, on the right sleeve. Sewn on just above it, was the patch for the very first shuttle flight, STS-1, which launched in 1981.

The front of the jacket was adorned with an additional three missions' patches, as well as the NASA insignia. Below the agency's emblem on the right chest was the STS-104 patch, the 105th shuttle mission and Kavandi's third and final flight.

On the left chest were the patches for STS-31 and STS-134. The earlier, sewn at top, represented the mission that deployed the Hubble Space Telescope. STS-31 was piloted by Charles Bolden, who Obama appointed as NASA Administrator.

STS-134, the second-to-last mission of the shuttle program and the final flight for orbiter Endeavour was commanded by Mark Kelly. Obama reached out to Kelly in January after the astronaut's wife, Congresswoman Gabrielle Giffords, was shot.

Rounding out the jacket's accessories were a lapel pin displaying NASA's shuttle program commemorative logo and a name tag. The Velcro-attached black tag was inscribed in gold letters: "Barack Obama, President of the United States of America"

Obama is not the first president to be gifted with an astronaut jacket. In 1988, the crew of STS-26, which returned the space shuttle to flight after the loss of orbiter Challenger, gave President Ronald Reagan a similar coat decorated with patches that flew on the shuttle Discovery mission.

On both occasions, the astronauts were dressed more like a president, foregoing their royal blue jackets for business suits.