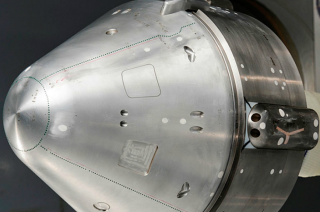 Boeing is testing a 12-by-14 inch aluminum model of its CST-100 space capsule in a wind tunnel at NASA's Ames Research Center. The company has said it hopes the CST-100 will be flying astronauts to and from the International Space Station by 2015.
(Image: © Boeing)

The veteran aerospace company Boeing is wrapping up a series of key wind-tunnel tests on a scale version for a new spaceship designed to ferry astronauts to and from the International Space Station.

For the past month, Boeing has subjected a 12-by-14-inch (31-by-36-centimeter) aluminum model of its CST-100 space capsule to ultra-high speed winds in a wind tunnel facility at NASA's Ames Research Center in California. Those trials should be complete by the end of this month, company officials said.

Engineers are using hundreds of tiny sensors to measure how air flows across the model, which is about 7 percent the size of an operational CST-100. Researchers plan to test the model capsule in more than 20 different positions to simulate the different stages of an aborted landing. [Photos: Boeing's CST-100 Space Capsule]

The goal is to make sure the CST-100 (short for Crew Space Transportation-100) is structurally sound and can be operated safely, Boeing officials said.

"As engineers, we like data and numbers, and you can take all of this and make something meaningful out of it," Boeing engineer Dustin Choe said in a statement. "We can reduce it down and provide a clearer picture of what we will experience in flight."

Boeing's CST-100 spacecraft is a gumdrop-shaped capsule that is 15 feet (4.5 meters) wide and designed to launch atop an expendable Atlas 5 rocket.

Boeing envisions the CST-100 transporting up to seven people to destinations in low-Earth orbit, such as the International Space Station and Bigelow Aerospace’s planned space station. Boeing and Bigelow are teaming up to help develop and demonstrate the space capsule.

In April, Boeing received $92 million from NASA during the second round of the space agency's Commercial Crew Development (CCDev) program. The company also received $18 million for the CST-100 during the first round of funding in February 2010.

Through CCDev, NASA is seeking to improve the capabilities of private spaceflight. Since the retirement of the space shuttle this past July, NASA is completely dependent on Russian Soyuz vehicles to ferry its astronauts to and from the space station.

NASA hopes that private companies like Boeing can take over this taxi service by the middle of the decade. Boeing officials have said they plan to be operating the CST-100 by 2015.

However, the space agency is not putting all of its eggs in Boeing's basket. NASA has also given money to other private spaceflight firms developing their own crew-carrying craft, including SpaceX, Blue Origin and Sierra Nevada Corporation.