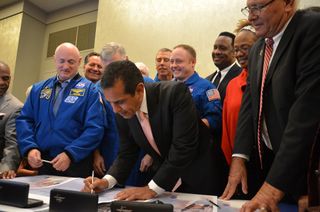 Los Angeles mayor Antonio Villaraigosa signs the title transfer for space shuttle Endeavour during a ceremony at the California Science Museum on Oct. 11, 2011. Endeavour will be permanently displayed at the science center for the public to see after delivery in 2012.
(Image: © collectSPACE.com)

LOS ANGELES — Space shuttle Endeavour's transfer from NASA to the California Science Center for its public display was signed and sealed Tuesday (Oct. 11). Now all that remains for the retired orbiter is for it to be delivered — a feat local leaders promise will be as large a spectacle as it is a challenge.

"The transfer of Endeavour, now done, from NASA to the California Science Center doesn't commemorate the end of Endeavour's work but the start of its next mission," Rudolph said. "We're committed to be excellent stewards for Endeavour and making sure it is successful on its new mission of advancing science learning and encouraging a passion for exploration as it was on its missions."

Endeavour's delivery from NASA's Kennedy Space Center in Florida to the west coast is not expected until next fall. In the interim, the space agency will continue preparing the spacecraft to be safe for public display while retaining its three main engines and other hardware for possible use with future launch vehicles.

The CSC, meanwhile, will use the time to construct a new temporary building to house Endeavour and raise the $200 million it needs to build a new Air and Space Center where the shuttle will stand, vertically, as its centerpiece.

Endeavour is the first of NASA's three retired space-flown orbiters to have its ownership transferred since the space shuttle program ended in August. Shuttle Discovery's title will be signed over to the Smithsonian after its arrival in Virginia, planned for next April. Atlantis will remain NASA property at the Kennedy Space Center Visitor Complex.

Shuttle Enterprise, which didn't fly in space but was used for atmospheric test flights, is similarly set to be given to the Intrepid Sea, Air and Space Museum in New York City next year.

Mother of all parades

Just as it did when it landed in California after seven of its 25 space missions, only in reverse, Endeavour will make its final cross country trip from Kennedy Space Center to Los Angeles atop a modified Boeing 747 airliner.

Once on the ground at Los Angeles International Airport (LAX), the shuttle will hit the road for the science center.

"It is going to circle [flying above] the L.A. area three times and then we're going to have a parade. The mother of all parades!" Villaraigosa announced. "People will be lining up the street from LAX through the great city of Inglewood, down Martin Luther King Boulevard — it is going to be a sight to be seen."

At 122 feet (38 meters) long and with a wingspan of 78 feet (24 meters), the shuttle is a much wider load than usual Los Angeles traffic. The city and neighboring Inglewood will need to remove and replace street signs, traffic lights, trees and other obstacles along Endeavour's way. Even then, the 13 miles between the airport and CSC will still be a slow roll using a NASA-furnished "overland transporter" — a wheeled-trailer — for the road trip.

"It is going to be amazing watching this space shuttle inch its way through the streets, going instead of 17,500 miles an hour [like when it was in orbit], maybe 1 mile per hour," Mike Fincke, an astronaut on Endeavour's STS-134 final flight crew, told collectSPACE during a press conference at the science center. "It's going to be a really motivating day, I think, for all us to watch the space shuttle inch its way here."

"It's going to be like the Pied Piper leading the kids," Fincke added. "There are going to be so many people coming and getting inspired. I'm really enthused about it. I think the team here has done a lot of homework. They've got a lot of work to go but I think they are going to pull it off brilliantly."

When Endeavour finally rolls up to the science center, a display building will be ready to house it. Construction on the new exhibit hall is set to begin soon.

"We've picked pretty much the design of what we're going to do in the location," CSC Vice President William Harris told collectSPACE. "Fortunately we have a space where it fits. The flow will be through the science center because it has to be an environmentally enclosed space that is also secure. We can provide that."

But that display, which will exhibit Endeavour horizontally as if it just landed back from space, is intended to be only temporary. For its permanent exhibit, the CSC is planning something much taller.

Continue reading at collectSPACE.com about the California Science Center’s planned vertical shuttle display and how you can join Team Endeavour by sponsoring a space shuttle tile.