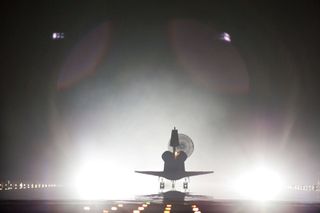 NASA officially signed over the ownership of Endeavour, its youngest space shuttle, to the California Science Center in Los Angeles today (Oct. 11), setting the stage for the retired spaceship's delivery to the museum next year.

Space agency officials handed over Endeavour's title during a ceremony at the science center and plan to deliver the space shuttle sometime in the second half of 2012.

"NASA is pleased to share this wonderful orbiter with the California Science Center to help inspire a new generation of explorers," NASA chief Charles Bolden said in a statement. "The next chapter in space exploration begins now, and we're standing on the shoulders of the men and women of the shuttle program to reach farther into the solar system." [NASA's Shuttle Program in Pictures: A Tribute]

The California Science Center is one of four institutions across the country selected by Bolden to serve as the permanent home for NASA's space shuttle vehicles. Bolden announced his decision on April 12 of this year, the 30th anniversary of the first space shuttle launchin 1981.

"Endeavour now will begin its new mission to stimulate an interest in science and engineering in future generations at the science center," said California Science Center president Jeffrey Rudolph.

Endeavour flew its final space voyage in May, when the shuttle visited the International Space Station to deliver a $2 billion astrophysics experiment during NASA's STS-134 mission commanded by astronaut Mark Kelly. NASA built Endeavour to replace the shuttle Challenger, which exploded and broke apart just after liftoff in 1986 while carrying a crew of seven astronauts.

While Endeavour is destined for California, its sister ship Atlantis will be displayed at the Kennedy Space Center Visitor Complex in Florida. Discovery, the oldest and most-flown of NASA's shuttle fleet, will be sent to the Smithsonian Institution's National Air and Space Museum in Washington, D.C.

The museums had to commit to cover the $28.8 million cost of preparing and delivering a space shuttle for display.

NASA's Enterprise prototype shuttle, which was used for landing tests but never flew in space, will be sent to New York City to be displayed at the Intrepid Sea, Air & Space Museum.  Enterprise is currently on display at the National Air and Space Museum's Steven F. Udvar-Hazy Center near Washington's Dulles International Airport. Enterprise will eventually be replaced by the shuttle Discovery, according to NASA's plan.

One other NASA shuttle, the Columbia orbiter, broke apart in 2003 while returning its seven-astronaut crew to Earth. Damage to the shuttle's left wing heat shielding caused the accident, NASA later found.

NASA retired its space shuttles in July after the shuttle Atlantis returned to Earth to end the 135th and final mission of the space shuttle program. That mission delivered vital supplies to the crew of the International Space Station.