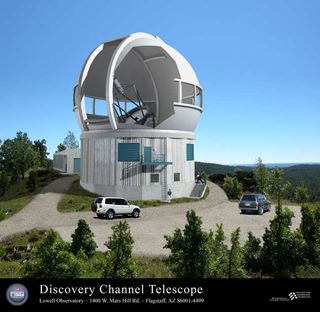 An artist's rendering of the Discovery Channel Telescope, to be completed in 2010. Image
(Image: © Lowell Obsevatory)

Gold shovels on hand, officials broke ground last week for the $35 million Discovery Channel Telescope to be built at the Lowell Observatory in Happy Jack, Arizona.

The partnership between the 111-year-old observatory and Discovery Communications began when Discovery caught wind that Lowell was looking into building a next generation telescope.

"The Discovery Channel Telescope and Lowell Observatory match up with Discovery's core genre," said Carrie Passmore, Senior Vice President of Public Partnerships at Discovery Communications. "It made perfect sense for us to make this move."

The Discovery Channel Telescope (DCT) will be one of the most sophisticated ground-based telescopes of its size. At 4.2 meters, it will be the fifth largest telescope in the continental United States. It's scheduled to see "first light" in 2009 and should be fully operational by 2010.

"We're sponsoring the creation and development of the telescope. Lowell of course will be the principle party responsible for maintenance and research," Passmore said. "Our hope is to be able to pipe that content and findings into schools across the U.S. and across the world. Our other programming will benefit from it as well."

The DCT will have a significantly wider field of view compared to other telescopes of its size. In its wide-field mode, the telescope will soak up light and provide deep, detailed images of the night sky.

"Because the telescope has such a large aperture it can image at faint light levels quickly," said Robert Millis, director of the Lowell Observatory. "You can cover a lot of sky at low levels of light."

The DCT, which will cover wavelengths from the ultraviolet to near infrared, has great capability as a survey instrument and will be able to scan the sky at nearly eight times the capacity of the next largest survey telescope.

"You can search the sky for objects of a particular type and find as many of these objects as you can," Millis said. "We will be using the telescope to survey the sky for objects like near-Earth asteroids, Kuiper Belt objects, and planets orbiting other stars."

Asteroids, objects and planets--especially a possible 10th planet--are all the types of things that Discovery hopes the new telescope will spot. "Those types of findings will be exciting for us to bring to the public," Passmore said.

Besides being big, what really sets the DCT apart from other survey scopes is that it can be quickly reconfigured from its primary wide-field mode to a prime focus configuration.

This option makes it possible to look very narrowly at objects and measure spectrometry, said Millis. It also makes the telescope be useful during brighter phases of the moon, when the added light pollutes the sky and makes it difficult to use standard wide-field survey scopes.

In addition to the reconfiguring option, the DCT is loaded with other technology, which while not unique to this telescope, is state-of-the-art, said Millis. The primary mirror--14-feet across and extraordinarily thin--will be equipped with an active support system constantly evaluating the images taken by the telescope and maintain the shape of the mirror to provide optimum imaging.

Although the Discovery Channel is paying for the telescope, that doesn't mean that the prime time lineup will be shaken up with tons of telescope-themed shows.

"The telescope is primarily a research telescope,"Millis said. "The research programs will be driven by agencies like NASA, which help fund research here at Lowell."

While research will be the main focus of the telescope, Millis suggests that big events in space will give Lowell a chance to partner with Discovery to showcase their work.

"Events like the recent Deep Impact mission or when the Shoemaker Levy 9 impacted Jupiter would be good opportunities to broadcast our work," he said.