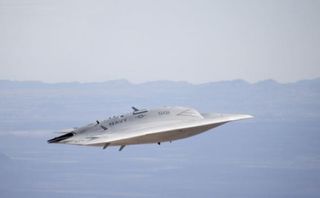 Military drones have already begun edging out manned fighter jets and bombers over the past decade, and the U.S. Navy doesn't plan on being left behind. Its vision for unmanned aerial warfare includes a tailless robotic aircraft resembling a UFO that is scheduled to begin landing on aircraft carriers in 2013. As a step toward that goal, the X-47B drone recently made its first flight in cruise mode with retracted landing gear.

The Navy has enlisted the X-47B drone — a Northrop Grumman design with a stealthy profile — as more than just its very first carrier-based drone. It also wants to use the X-47B as a test platform for autonomous aerial refueling without human assistance in 2014.

"Last week's flight gave us our first clean look at the aerodynamic cruise performance of the X-47B air system … and it is proving out all of our predictions," said Janis Pamiljans, vice president and Navy UCAS program manager for Northrop Grumman's Aerospace Systems sector.

The flight test also served as a trial run for the robotic aircraft's onboard navigation hardware and software. Such robotic brains are designed to help the X-47B take off from and land on the heaving deck of an aircraft carrier.

Planned tests for the drone don't include weapon or sensor demonstrations, but there's no apparent reason why it might not carry weapons in the future. The U.S. military has already demonstrated the lethality of armed drone strikes with its Reaper and Predator unmanned aerial systems in Afghanistan, Iraq and Pakistan, and the Navy has also announced plans to arm ship-based helicopter drones.

The latest test flight took place at Edwards Air Force Base in California.