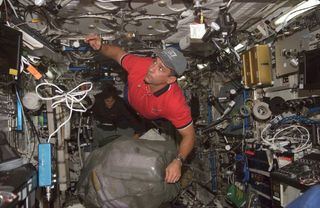 Astronaut William Oefelein, STS-116 pilot, moves a stowage bag through the Destiny laboratory of the International Space Station while Space Shuttle Discovery was docked with the station.
(Image: © NASA.)

A former NASA astronaut who was involved in a bizarre love triangle with another astronaut in 2007 has survived the crash of a small plane he was piloting in rural Alaska last month, according to news reports.

Ex-astronaut Bill Oefelein, who piloted the space shuttle Discovery's STS-116 mission in December 2006, was at the controls of a small plane when it stalled and crashed 50 miles (80 kilometers) north of Anchorage on Sept. 15, the Associated Press reported.

After the aircraft stalled, Oefelein was able to steer the six-seat Regal Air Cessna 206 floatplane into a swampy area of alder bushes about 200 feet (61 meters) from Judd Lake. While the aircraft sustained heavy damage, none of the three on board were injured in the accident, according to the AP.

In 2007, Oefelein found himself at the center of an astronaut love triangle involving his former girlfriend and ex-astronaut, Lisa Nowak, and his new love interest at the time, Air Force captain Colleen Shipman.

In February 2007, in a strange turn of events, Nowak drove 900 miles (1,450 km) from Houston and confronted Shipman in the parking lot of the Orlando International Airport. After the altercation, Nowak faced charges of attempted kidnapping, burglary and battery.

She pleaded guilty to felony burglary and misdemeanor battery in a criminal case in November 2009, and was sentenced to a year of probation. Nowak was fired from NASA's astronaut corps, and was forced to retire from the Navy on Sept. 1 of this year with an "other than honorable" discharge.

Oefelein was also dismissed from NASA. He and Shipman are now married and live in Anchorage, according to the AP.

The National Transportation Safety Board (NTSB) highlighted Oefelein's piloting skills at the time, saying it would have taken "nerves of steel" to pull off the risky landing, reported the AP.

The plane was recovered and recently underwent an engine check, but the NTSB's Alaska regional chief Jim La Belle said that no problems were detected, according to the AP. The Board will continue their investigation into the cause of the crash, including examining potential issues involving the pilot or the plane's mechanics.

A preliminary report of the crash is expected to be released soon, the newswire service reported.