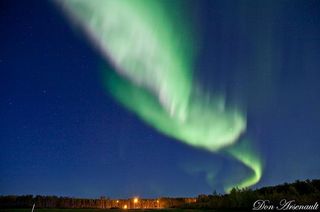 This week, we tracked a daredevil comet, the Harvest Moon, super-charged northern lights and a host other stunning views of space.

Take a look at some of the best photos from space in the past seven days:

Particles blasted into space by last week's solar storms barreled into Earth on Friday (Sept. 9), putting on quite a light show for some skywatchers in northern latitudes. [Full Story]

The full moon of September hit its peak Monday (Sept. 12), thrilling skywatchers around the world who turned out to photograph the Harvest Moon of 2011. [Full Story]

For the next three weeks NASA's Solar Dynamics Observatory satellite will be poised to watch the Earth block out the sun as part of the spacecraft's twice-yearly eclipse season. [Full Story]

A comet made its death plunge into the sun late Wednesday (Sept. 14), scientists say. [Full Story]

When a Russian spaceship returned three space men home Friday morning (Local Kazakhstan Time), the recovery team sent to meet them caught a stunning sight: a Soyuz space capsule floating to Earth under a parachute with a bright moon in background. [Full Story]

A nearby star is pummeling its close-orbiting planet with a barrage of X-rays 100,000 times more intense than the Earth receives from the sun. [Full Story]

To the Moon, Grail!

The Delta 2 Heavy rocket carrying NASA’s twin Gravity Recovery and Interior Laboratory (GRAIL) mission blasts off from Space Launch Complex 17B on Cape Canaveral Air Force Station in Florida. The spacecraft launched at 9:08:52 a.m. EDT on Sept. 10, 2011, en route to lunar orbit, where they will study the moon's gravity. [See the more daily space photos in this gallery]

One of this week's stunning views came from Mars, showing Holden crater, which is 87 miles (140 km across). It is located in the southern highlands of Mars. The image was acquired by ESA's Mars Express spacecraft on August 15, 2009. Neighboring Eberswalde crater, at the top left of this image, shows distinct traces of a delta, suggesting that a lake of liquid water used to exist there. [See the more daily space photos in this gallery]

Give It the Gas

ESA's Herschel infrared space observatory discovered that galaxy collisions aren't always required for vigorous star birth in galaxy evolution. The finding overturns a long-held assumption about how galaxies evolve. In the present universe, high birth rates of stars always seem to be triggered by galaxies colliding with each other. Herschel looked at galaxies very distant, seeing them as they were billions of years ago, and thus helped researchers draw the conclusion that star birth rate depends on the quantity of gas galaxies contain, not whether they are colliding. This image shows streams of cold gas feeding a galaxy. [See the more daily space photos in this gallery]