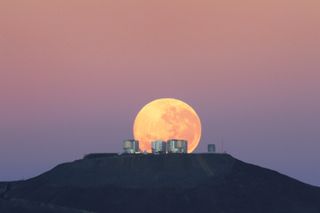 The dazzling full moon sets behind the Very Large Telescope in Chile's Atacama Desert in this photo released June 7, 2010 by the European Southern Observatory. The moon appears larger than normal due to an optical illusion of perspective. Full Story.
(Image: © Gordon Gillet, ESO.)

If you're located in the Northern Hemisphere, you might have the opportunity to spot a special full moon in the sky this weekend: the Harvest Moon.

This month's special full moon gets its name because its appearance low in the southeastern sky for several nights historically afforded farmers extra time for harvesting crops. Before the invention of electricity, farmers relied on bright moonlight in the late summer to gather their ripening crops after sunset.

The moon typically rises about 50 minutes later each night, but during several nights around the Harvest Full Moon, it can rise between 25 to 30 minutes later across the United States. In other Northern Hemisphere locations, like Canada and Europe, the moon can rise just 10 to 20 minutes later around a Harvest Moon, according to SPACE.com's skywatching columnist Joe Rao. [Photos: Our Changing Moon]

Traditionally, the designation "Harvest Moon" is given to the full moon that happens closest to the autumnal (or fall) equinox, which occurs on Sept. 23 this year. While the Harvest Moon typically occurs in September in the Northern Hemisphere, it can occur in early October about once or twice each decade, according to Rao. [Infographic: Phases of the Moon Explained]

Skywatchers and amateur astronomers should hope for clear skies that will offer them nice views of the Harvest Moon. But, in addition to marveling at the bright sight, many detailed features on the moon can be seen with the ordinary binoculars or small telescopes.

Editor's note: If you snap an amazing photo of September's Harvest Moon and would like to share it with SPACE.com for a possible story or gallery, please contact managing editor Tariq Malik at: tmalik@space.com.