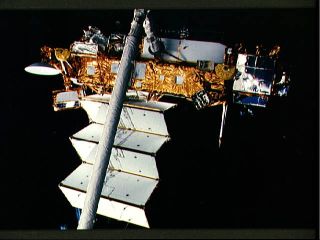 The Upper Atmosphere Research Satellite is in the grasp of the remote manipulator system end effector above the payload bay of the Earth-orbiting Discovery during STS-48 pre-deployment checkout procedures.
(Image: © NASA Johnson Space Center)

A massive, dead satellite that is falling back to Earth on an uncontrolled path is expected to hit the ground sometime in late September, and while most of the debris will break up as it hits the atmosphere, some pieces are expected to reach the ground intact.

NASA's defunct Upper Atmosphere Research Satellites (UARS) is a roughly 13,000-pound (6,000 kilogram) spacecraft that was launched into orbit in 1991 aboard the space shuttle Discovery. The satellite was decommissioned in 2005, and has been drifting in orbit for six years now. [Photos of Space Debris]

Here is a NASA-provided list of frequently asked questions about space debris and falling space junk:

What is orbital debris?

Orbital debris is any man-made object in orbit about Earth which no longer serves a useful purpose.

What are examples of orbital debris?

Derelict spacecraft and upper stages of launch vehicles, carriers for multiple payloads, debris intentionally released during spacecraft separation from its launch vehicle or during mission operations, debris created as a result of spacecraft or upper stage explosions or collisions, solid rocket motor effluents, and tiny flecks of paint released by thermal stress or small particle impacts.

How much orbital debris is currently in Earth orbit?

More than 22,000 objects larger than 4 inches (10 cm) are currently tracked by the U.S. Space Surveillance Network. Only about 1,000 of these represent operational spacecraft; the rest are orbital debris. The estimated population of particles between .4 inches and 4 inches (1 to 10 cm) in diameter is approximately 500,000. The number of particles smaller than .4 inches (1 cm) probably exceeds tens of millions. [Video: The Expanding Danger of Space Debris]

Are orbital debris uniformly distributed about the Earth?

Most orbital debris reside within 1,250 miles (2,000 km) of Earth's surface. Within this volume, the amount of debris varies significantly with altitude. The greatest concentrations of debris are found near 500-530 miles (800-850 km).

How fast are orbital debris traveling?

In low Earth orbit (below 1,250 miles, or 2,000 km), orbital debris circle the Earth at speeds of between 4 and 5 miles per second (7 to 8 km/s). However, the average impact speed of orbital debris with another space object will be approximately 6 miles per second (10 km/s). Consequently, collisions with even a small piece of debris will involve considerable energy. [Related: How Much Junk is in Space?]

How is the International Space Station protected against orbital debris?

The International Space Station, or ISS, is the most heavily shielded spacecraft ever flown. Critical components such as habitable compartments and external high pressure tanks normally will be able to withstand the impact of debris as large as .4 inches (1 cm) in diameter. ISS also can maneuver to avoid tracked objects. ISS executes a collision avoidance maneuver once a year on average.

How long will orbital debris remain in Earth orbit?

The higher the altitude, the longer the orbital debris will typically remain in Earth orbit. Debris left in orbits below 370 miles (600 km) normally fall back to Earth within several years. At altitudes of 500 miles (800 km), the time for orbital decay is often measured in decades. Above 620 miles (1,000 km), orbital debris normally will continue circling Earth for a century or more.

Is re-entering debris a risk to people and property on Earth?

A significant amount of debris does not survive the severe heating which occurs during re-entry. Components which do survive are most likely to fall into the oceans or other bodies of water or onto sparsely populated regions like the Canadian Tundra, the Australian Outback, or Siberia in the Russian Federation. During the past 50 years an average of one cataloged, or tracked, piece of debris fell back to Earth each day. No serious injury or significant property damage caused by re-entering debris has been confirmed.

What can be done about orbital debris?

The most important action today is to prevent the unnecessary creation of additional orbital debris. This can be done through prudent vehicle design and operations. Cleaning up the environment remains a technical and economic challenge that is currently being investigated by the United States and other countries.

Do other countries have guidelines on orbital debris?

Where can I read more about orbital debris?