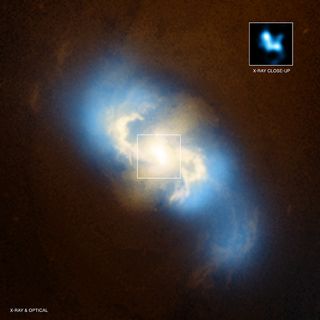 A monstrous black hole at the heart of one galaxy is being devoured by a still larger black hole in another, scientists say. The discovery is the first of its kind.

At the centers of virtually all large galaxies are black holes millions to billions of times the mass of the sun. Models simulating the formation and growth of galaxies predict their black holes evolve as the galaxies do, by merging with others.

Astronomers had witnessed the final stages of the merging of galaxies of equal mass, so-called major mergers. Minor mergers between galaxies and smaller companions should be even more common, but, strangely, these had not been seen until now. [Photos: Black Holes of the Universe]

In the new study, scientists may have unexpectedly detected a minor merger about 160 million light-years away in a galaxy dubbed NGC3393.

"Seeing this was altogether a surprise," study lead author Giuseppina Fabbiano, an astrophysicist at the Harvard-Smithsonian Center for Astrophysics in Cambridge, Mass., told SPACE.com.

The scientists originally looked at this galaxy only to learn more about what they thought was the sole black hole at its center. [Video: Spiral Galaxy Harbors Double Supermassive Trouble]

As galaxies collide, the results can be dramatic — for instance, nearby galaxies NGC6240 and Mrk 463, apparently the results of major mergers, show disrupted shapes and many new stars that have formed around their cores.

In contrast, this newfound galactic product of a minor merger surprisingly has a regular spiral shape like the Milky Way and has a mostly old population of stars around its heart. "It doesn't look perturbed or anything," Fabbiano said.

These findings support models that suggest minor mergers may not perturb the larger of the merging galaxies much. This could explain why these relatively commonplace mergers have not been spotted until now — there is not much evidence of the crash in visible wavelengths of light, and even when it comes to X-rays, one can only spot two black holes in a galaxy's core if both happen to be eating stars at the same time and thus unleashing radiation simultaneously.

"Chandra is the only instrument that could have detected this, and even then, it was pushing the envelope of its resolution due to how close these black holes are," Fabbiano said. "Now that we know what is going on, we can go back and look at boring galaxies to see if we find anything."

The scientists detailed their findings in today's (Aug. 31) online issue of the journal Nature.