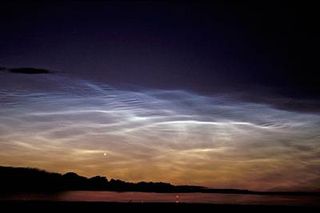 According to the newspaper Shanghai Daily, air traffic at a major Chinese airport was temporarily halted on Wednesday (Aug. 17) — not because of a power failure or bad weather, but because of a potentially threatening Unidentified Floating Object.

Details about the incident remain sketchy, but someone (it's not clear whether it was pilots, air traffic controllers or people on the ground) reported seeing the mysterious UFO hovering over Jiangbei International Airport in southwestern China. The white doughnut-shaped object stayed in the sky for nearly an hour before fading away.

The newspaper said that some airport workers dismissed the UFO as a huge balloon or Chinese lantern, and though these skeptical explanations may have been responsible for earlier UFO sightings, this particular UFO has a much more prosaic explanation. [Look! Up in the Sky! A Recent History of UFO Sightings]

In fact, the UFO seen over Jiangbei looks almost exactly like a UFO seen over Moscow last year. And that UFO, in turn, was identified by meteorologists as an optical illusion caused by sunlight hitting a cloud disturbed by wind (or, when it occurs near an airport, plane traffic) under the right circumstances.

It's what known as a hole-punch cloud, which can form in two types of clouds, cirrus and cirrostratus. These clouds are composed of ice crystals and super-cooled water droplets, and when disturbed freeze instantly or evaporate. The droplets that re-freeze rejoin the rest of the cloud; the ones that evaporate form a strange hole in the cloud. [10 Alien Encounters Debunked]

This is only the most recent of a series of UFO reports coming out of China. Many of the Chinese reports have been debunked as astronomical phenomenon, military tests and so on. For example, some of the UFO reports described the appearance and location of Venus; and Wang Sichao, a planetary astronomer with the Chinese Academy of Science, found that some of the UFO photos were actually created by reflections of outdoor lamps on camera lenses.

Assuming the news report is true (and the Chinese government and media are not known for prompt and accurate reporting), it's not clear why airport officials would have thought that a cloud — albeit a very unusual one — might be a threat to aviation safety.

Then again, airports around the world are known for overreacting to minor or nonexistent security threats and err on the side of caution. Most airplane passengers would likely agree: Better safe than sorry, whatever the UFO is.

This story was provided by Life's Little Mysteries, a sister site to SPACE.com.  Benjamin Radford is deputy editor of Skeptical Inquirer science magazine and author of Scientific Paranormal Investigation: How to Solve Unexplained Mysteries. His Web site is www.BenjaminRadford.com.