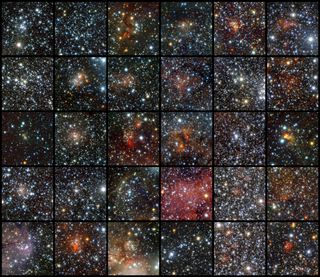 Using data from the VISTA infrared survey telescope at the The European Southern Observatory’s Paranal Observatory in Chile, an international team of astronomers discovered 96 new open star clusters hidden by the dust in the Milky Way. Thirty of these clusters are shown in this mosaic.
(Image: © ESO/J. Borissova)

A horde of previously unseen star clusters has been discovered by astronomers using a telescope that pierced through the thick curtains of dust in our Milky Way galaxy to reveal the faint stellar groups.

In all, 96 open star clusters were discovered by peering through the galactic dust – the first time so many faint and small clusters were found at once, officials at the European Southern Observatory (ESO) said in a statement.

These tiny and faint objects were invisible to previous cosmic surveys, but the VISTA telescope at ESO's Paranal Observatory in the Chilean desert has sensitive infrared detectors that can peer through the dust in the Milky Way.

The discovery of the 96 star clusters comes just one year after the start of the VISTA Variables in the Via Lactea (VVV) program, which is one of six public surveys being conducted with the telescope. The results of the new study will appear in the journal Astronomy & Astrophysics. [VIDEO: 96 Star Clusters Discovered by Largest Survey Telescope]

"This discovery highlights the potential of VISTA and the VVV survey for finding star clusters, especially those hiding in dusty star-forming regions in the Milky Way's disc," said Jura Borissova, lead author of the new study.

The bulk of stars with more than half the mass of our sun form in groups, called open clusters. These clusters are the building blocks of galaxies and are vital to the formation and evolution of galaxies such as our own. [How to Spot a Star Cluster]

But, stellar clusters typically form in very dusty regions that block or absorb a lot of the visible light being emitted by the young stars, making them invisible to most sky surveys.

"In order to trace the youngest star cluster formation we concentrated our search towards known star-forming areas," Dante Minniti, lead scientist of the VVV survey, said in a statement. "In regions that looked empty in previous visible-light surveys, the sensitive VISTA infrared detectors uncovered many new objects."

The astronomers used sophisticated computer software to remove foreground stars that appear in front of each cluster in order to take a census of the true cluster members. Visual inspections of the images were then made to measure the sizes of the clusters.

For the busiest clusters, the researchers made other measurements, such as distance and age.

"We found that most of the clusters are very small and only have about 10-20 stars," said Radostin Kurtev, a research team member. "Compared to typical open clusters, these are very faint and compact objects – the dust in front of these clusters makes them appear 10,000 to 100 million times fainter in visible light. It's no wonder they were hidden."

To date, only 2,500 open star clusters in the Milky Way have been detected, the researchers said. But, current estimates say that as many as 30,000 could be hidden behind dust and gas. In other words, the 96 open clusters that were found could just be the tip of the iceberg.

"We've just started to use more sophisticated automatic software to search for less concentrated and older clusters," said Borissova. "I am confident that many more are coming soon."

Astronomers are using the VISTA telescope to scour our galaxy's central regions for new variable objects. The survey is also aimed at mapping the Milky Way's structure in greater detail than ever before.