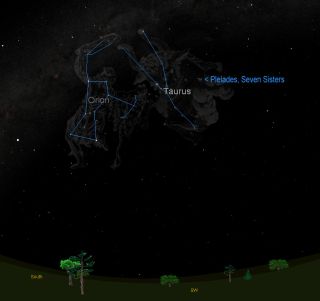 Two of the very best star clusters for skywatchers are high in our evening sky and toward the south at around 8 p.m. EST (0100 GMT). You can easily locate them by using the famous three-star belt of the constellation Orion, the Mighty Hunter.
(Image: © Starry Night Software)

With the moon now out of the evening sky, now is an ideal time to use your binoculars to explore the star clusters that are now visible, with the constellations of Orion and Taurus pointing the way.

Open star clusters represent aggregations of young, recently born stars. They can be found in our Milky Way galaxy’s local spiral arm, the interior of which is visible at this time of year.

Two of the very best star clusters for skywatchers are high in our evening sky and toward the south at around 8 p.m. EST (0100 GMT). You can easily locate them by using the famous three-star belt of the constellation Orion, the Mighty Hunter.

Extending an imaginary line from the belt, upward and to the right will take you to the star clusters of Hyades and Pleiades in the constellation Taurus, the Bull. The sky map of Orion and Taurus in this story shows how they appear overhead in the night sky.

Interestingly, Australian aborigines believed that the three belt stars of Orion were three young men dancing to the music played by nearby maidens (the Pleiades). Indeed, the most beautiful and famous star cluster in the night sky is the Pleiades.

Few star figures are as familiar as the star cluster Pleiades, which is also known as the Seven Sisters.

Anyone having difficulty in recognizing various stars and constellations should start with the Pleiades, because there is nothing else like them in the sky, and nobody can look very long at the heavens on a winter night without noticing them and wondering what they are. [Winter Skywatching Tips]

To the average observer's eye, this group looks at first like a shimmering little cloud of light. But further examination, aided by good eyesight, will reveal a tight knot of tiny stars. About 250 stars have been identified as members of this cluster.

Gaze at them through binoculars: The brightest stars glitter like an array of icy blue diamonds on black velvet. Or as Alfred Lord Tennyson wrote, they "Glitter like a swarm of fireflies tangled in a silver braid."

The traditional Greek legend for the Seven Sisters is that they are the daughters of Atlas and Pleione.  Their father, Atlas, rebelled against Zeus, the king of the gods, who retaliated by sentencing him to forever holding up the heavens on his shoulders.

This so grieved the sisters that Zeus placed them in the heavens so that they could be close to their father.

Interestingly, widely separated and totally different cultures have always described the Pleiades as the "Seven Sisters," "Seven Maidens," or "Seven Little Girls." Yet, only six stars are readily visible to most.

Those with more acute eyes can glimpse a dozen or more. But why this cluster has been cited by more than one early people as having seven members remains a mystery.

Several stars in the cluster seem to be enveloped in clouds of dust, perhaps left over from the stuff of which they were formed. About 410 light-years away, and some 20 light-years across, the group may be no older than 20 million years and contain a total of perhaps 250 stars.

When I give planetarium shows to grammar and elementary school children, I point out Taurus and ask why he might be so angry. I'll then point to the Pleiades and note, "Maybe it’s because he has seven bumblebees sitting on his back, stinging him."

The Bull's eye and face

The Pleiades cluster is in the Bull's shoulder. The Bull's face is plainly marked by the fine V-shaped cluster of the Hyades.

If you look closely, you may notice the bright orange star at the end of the lower arm of the V, which represents the Bull’s fiery eye. That's the star Aldebaran, "the follower." It rises soon after the Pleiades and pursues them across the sky.

The Hyades is among the nearest of the star clusters, which explains why so many of the separate stars can be readily seen.

At a distance of 130 light-years, the Hyades members travel through space like a flock of geese, their paths ultimately converging toward a between the stars Betelgeuse in Orion and Procyon in Canis Minor, while receding from us at the rate of 100,000 mph.

Aldebaran, on the other hand, is a foreground star that does not belong at all to the Hyades and is moving toward the south almost at right angles to the cluster's motion and twice as fast.

In the old allegorical star maps, Taurus appears to be making at charge at Orion, the Hunter. Orion, in order to protect himself, is holding an upraised club in one hand, while brandishing a lion skin as a sort of shield (almost like a matador would hold a cape).

At the moment, with both Bull and Hunter high in our southern sky, it appears as if the battle is about to begin.

As the night wears on, however, Taurus will appear to descend the western sky, ultimately disappearing in the after-midnight hours. Orion too will gradually disappear, his upraised club the last to vanish below the horizon, almost like a symbol of victory.