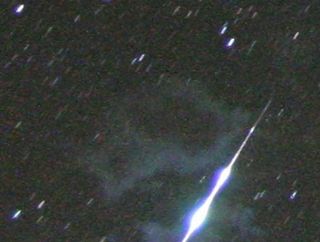 Each summer skywatchers all over the world look forward to observing the annual mid-August performance of the Perseid meteors, but often overlook some of the lesser showers that peak in the days leading up to the main event.

This year, sadly, the full moon will seriously hamper the 2011 Perseid meteor shower. But this week, the moon is a thin waning crescent and will arrive at new phase on Saturday, leaving the sky dark and moonless from dusk to dawn.

This makes it a great opportunity to enjoy two displays of "shooting stars" that will be active and near their peak this weekend, which can provide some entertaining viewing: the Delta Aquarids and the Alpha Capricornids. [Stunning Meteor Shower Photos]

The actual number of meteors an observer can see in an hour depends strongly on sky conditions. The rates that we quote here are based on your having a really good, dark sky, having some experience in meteor observing and the assumption that you have the radiant of that particular shower directly overhead.

The radiant is the place in the sky where the path of shower members, if extended backward, would intersect when plotted on a star chart. Many people are misled into thinking that this is the best place to look for these meteors, but actually only stationary meteors – ones coming nearly straight at you – can be seen here.

As it turns out, the radiants of the Delta Aquarids and Alpha Capricornids are in the same general region of the sky. [2011 Meteor Shower Guide]

In fact, at around 2:30 a.m. local daylight time, both radiants will be nearly due south at a point roughly midway from the horizon to the overhead point (the zenith); an altitude of about 45 degrees. At that altitude, the hourly rate is still a respectable 70 percent of the number you would see if the radiant was directly overhead.

So really, the best advice I can offer to anyone who is looking for meteors this weekend is to concentrate your gaze overhead and toward the southern part of the sky from about 1 to 4 a.m.

What you should expect

The Delta Aquarids is a display that actually is composed of two radiants, suggesting that we are seeing two distinct streams of celestial debris burning up in our atmosphere. As many as 15 to 20 meteors per hour are provided by this shower.

According to meteor expert Alastair McBeath, you should expect to see chiefly faint, medium-speed meteors, with occasionally significantly brighter events. About 5 to 10-percent of these will leave a persistent trail for perhaps a few seconds. Notes McBeath: "Recent analyses suggest the maximum may not be so sharp … and rates may be similar from July 28-30."

The Alpha Capricornids is a weak, albeit long-lasting shower that runs from about July 3 to Aug. 15, with a peak probably around July 30 to Aug. 1. Although the hourly rate is normally no more than 5, what makes the Alpha Capricornids worth watching are that they frequently produce bright yellow fireballs that can be quite spectacular.

And of course, don’t forget to be on the lookout for the first forerunners of the Perseid display.  The Perseids started to become active around July 17 and will really begin to ramp up in intensity around Aug. 8 or 9.

Right now, they probably number less than 5 per hour, but if you’re looking overhead and facing south, watching for Aquarid and Capricornid meteors and catch sight of a flaring meteor that leaves a long lasting trail cutting across the sky from your left you likely will have seen an early Perseid.