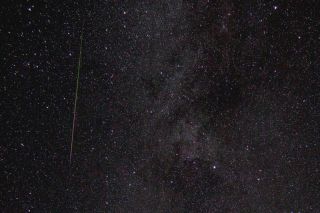 Skywatcher Ivo Leupi snapped this photo of a meteor during the Perseid meteor shower on Aug. 9, 2010 from Westmeath, Ontario in Canada at about 1:30 am local time.
(Image: © Ivo Leupi.)

For those who look forward each summer to the annual performance of the Perseid meteor shower in mid-August, there is some not-so-good news this year.

The peak of this year’s display is due early Saturday morning (Aug. 13).  But as luck would have it, the moon will be full at that same time.  As a result, skywatchers should not expect to obtain meaningful meteor counts.

The meteors are called Perseids because they appear to emanate from the constellation of Perseus, which in the predawn hours is high in the northeast sky. These early morning hours are when the meteors themselves occur in good numbers. Unfortunately, the moon, which will be lurking in the constellation of Aquarius, will be the big bugaboo. It will be above the horizon for the entire night and will likely squelch most of the meteor streaks with its bright light.

For every magnitude of naked-eye stars hidden by moonlight or light pollution, the number of meteors is cut by about 60 percent. Normally, under a clear, dark sky free of any bright moonlight, you would expect to see stars down to magnitude +6.5 — that is considered to be the threshold; these are the dimmest stars visible without using any optical aid. Astronomers use the magnitude scale to rank a celestial object's brightness. Remember this simple rule: the higher the magnitude, the fainter the star.  With such dark sky conditions on the peak night of the Perseids, you might expect to see as many as 90 to 100 meteors per hour. [Spectacular Leonid Meteor Photos]

But factoring a full moon into the equation could cause you to only see stars down to about magnitude +4.0, meaning that you might see only about one-tenth the meteors you would without that brilliant moonlight. And if you are handicapped additionally by local light pollution, the number of meteors you might see will drop even more. So you can understand what you’ll be up against if you plan to watch for Perseids on the peak night this year.

This doesn’t mean that you won’t see any meteors.  As meteor expert Alastair McBeath notes in the 2011 Astronomical Calendar: Perseid "activity should be good enough for some to still survive the moon.  Perseids are fast, often bright and frequently leave persistent trains."

And you can escape the moon by watching early. A goodly number of Perseids can be seen during the first week of August, in the hours between moonset and the beginning of morning twilight.  On the morning of Aug. 11, two days before maximum, there are about 20 minutes of darkness between moonset and the first light of dawn. On the morning of Aug. 10, there are almost 90 minutes and on the 9th, about 2-1/2 hours. [Mystery of Green Fireball 'UFOs' Solved]

In addition to the Perseids, there are about a half-dozen other minor meteor showers that occur from late July into mid-August, which are relatively little observed, being usually overshadowed by the Perseids. Perhaps these minor showers will get more attention this year, as conditions for observing them are relatively favorable compared to the Perseids.  We’ll have more to say about these celestial streakers later this month, so stay tuned!