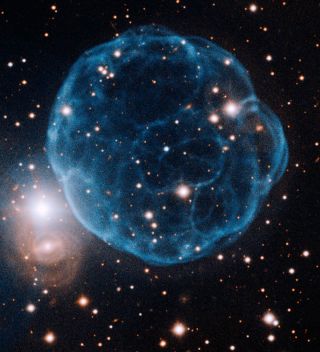 This Gemini Observatory image of Kronberger 61 shows the ionized shell of expelled gas resembling a soccer ball. The light of the nebula here is primarily due to emission from twice-ionized oxygen, and its central star can be seen as the slightly bluer star very close to the center of the nebula.
(Image: © Gemini Observatory/AURA)

A soccer-ball-shaped planetary nebula discovered by an amateur astronomer may help scientists better understand these odd structures, which are created by the last gasps of dying stars.

Researchers announced the existence of the newly discovered planetary nebula — named Kronberger 61, or Kn 61 — at a symposium today (July 25) in Tenerife, Spain.

Astronomers described the puffy nebula, which is located in a small patch of sky being monitored closely by NASA's planet-hunting Kepler Space Telescope, as resembling a soccer ball in deep space. Follow-up observations by Kepler may help answer key questions about planetary nebulas — such as how their formation may be shaped by companions, be they other stars or alien planets. [Photo of the "soccer ball" nebula]

"Explaining the puffs left behind when medium-size stars like our sun expel their last breaths is a source of heated debate among astronomers, especially the part that companions might play," said Orsola De Marco, of Macquarie University in Sydney, Australia, in a statement. "It literally keeps us up at night!"

Nothing to do with planets

Planetary nebulas form when stars like our sun exhaust their hydrogen fuel. The stars' outer layers expand and cool, creating a huge envelope of dust and gas. Radiation flowing from the dying star ionizes this envelope, causing it to glow. [Spectacular Photos of Nebulas in Deep Space]

Contrary to their name, planetary nebulas have nothing to do with planets. Rather, the term refers to their superficial resemblance to giant planets, when observed through early telescopes.

Kn 61 is named after its discoverer, Austrian amateur astronomer Matthias Kronberger, who found the object after poring over data provided by the Digital Sky Survey. Kronberger and other amateur skywatchers were encouraged by professional astronomers to look specifically in the star field covered by Kepler.

"Without this close collaboration with amateurs, this discovery would probably not have been made before the end of the Kepler mission," said George Jacoby of the Giant Magellan Telescope Organization and the Carnegie Observatories in Pasadena, Calif. "Professionals, using precious telescope time, aren't as flexible as amateurs, who did this using existing data and in their spare time. This was a fantastic pro-am collaboration of discovery."

NASA launched the Kepler observatory in March 2009 on a mission to determine the frequency of Earth-size planets around sun-like stars. The instrument, which has found more than 1,200 candidate alien planets to date, is peering at 150,000 stars near the northern constellation of Cygnus the Swan.

Kepler finds planets by detecting tiny dips in these stars' brightness caused when an object passes in front of, or transits, them from the telescope's perspective.

But researchers are also pressing Kepler's keen eye into service to search for companion objects near planetary nebulas. They hope to better understand how these strange objects evolve, and what causes their often intricate shapes.

"Planetary nebulae present a profound mystery,” De Marco said. "Some recent theories suggest that planetary nebulae form only in close binary or even planetary systems. On the other hand, the conventional textbook explanation is that most stars, even solo stars like our sun, will meet this fate. That might just be too simple."

Astronomers have discovered more than 3,000 planetary nebulas in our part of the Milky Way galaxy. To date, only about 20 percent of these have been found with companions. However, this low percentage may simply result from the difficulty of finding companions, many of which may be too small and/or dim to detect with ground-based telescopes, researchers said.

The professional-amateur partnership, using Kepler's sharp instruments, may help astronomers get to the bottom of things. So far, six planetary nebulas have been found in the Kepler field, including Kn 61.