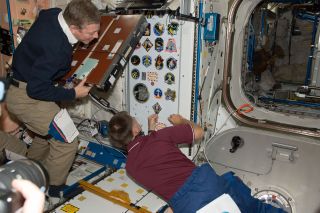 Completing a tradition that dates back more than 30 space shuttle missions, the four astronauts flying on NASA's final shuttle flight added their insignia to several of the walls aboard the International Space Station before leaving the orbiting laboratory Tuesday (July 19) for the final time.

"This is the last shuttle. This is the last time we are going to do this," shuttle Atlantis' STS-135 mission commander Chris Ferguson said Monday (July 18) before applying a decal showing their insignia to a long panel in the station's Unity Node 1 module.

The addition of the emblem near the bottom of a wall panel covered in space shuttle patches in the station's Unity node not only marked the successful end to the astronauts' work transferring cargo between the space station and Atlantis, but perhaps more poignantly, offered an on-orbit showcase for the 135th and last space shuttle mission patch.

"Even though it is [at] the bottom, it's really the capstone of the space station construction," Ferguson said. [Photos: NASA's Last Shuttle Mission in Pictures]

A place to leave our patch

Even before the first space shuttle left the launch pad in April 1981, astronaut crews had been designing emblems to represent their missions' goals and themselves. They wore the patches on their spacesuits and on their in-flight apparel, as well as carried spares to space as souvenirs. NASA used the crews' insignia to adorn everything from the astronauts' checklists to the packing foam used to protect equipment being launched into orbit.

When the shuttle began lofting the large components that today make up the complete space station, the astronauts accompanying the modules began leaving their emblems — either in sticker or embroidered form — on the walls of the orbiting research facility as a sign that they had been there. Today, there are full wall panels covered by mission patches.

"They do have a place where we leave the patches and our stickers," STS-135 mission specialist Rex Walheim told collectSPACE.com on Friday (July 15) from on board the space station.

"We're going to leave our patch in Node 1," Walheim said, referencing the first U.S.-launched piece of the station, called Unity, where a panel displays the emblems of all 37 — including now STS-135 — shuttle missions to visit and help build the International Space Station.

Most mission patches are rich in symbolism and the STS-135 insignia that Ferguson and his crewmates left on the International Space Station "Alpha" is no different.

According to NASA, Atlantis is centered over elements of the NASA logo on the STS-135 patch to depict how the space shuttle has been "at the heart of NASA" for the last 30 years.

"One of the main things we wanted to show with our patch was that it is an incredible team that makes the space shuttle program possible," said Walheim in a pre-flight interview. "That's why we incorporated part of the NASA emblem. We wanted to show [that] it's the contractors and the NASA civil servants and the whole team that makes it possible, so that's what that symbolizes."

"And then of course, the shuttle kind of reminisces almost of the STS-1 patch a little bit," Walheim said, referring to the first space shuttle mission patch, which also featured the shuttle launching.

The shuttle and the elements from the NASA emblem are framed on the patch by omega, the last letter in the Greek alphabet, recognizing STS-135 as the last mission of the space shuttle program.

According to Ferguson, the choice of the Greek letter was also an attempt to be subtle.

"We tried to — without being overt about it — insinuate that this was in fact the last flight, and hence the omega," said Ferguson. "We didn't want to be too far out there but we did want the subtlety to come through and when somebody looks at the STS-135 patch and says it's the omega; that's the last flight."

Continue reading about where the STS-135 patch was left on the space station and follow the final space shuttle mission by visiting collectSPACE.com’s STS-135 Flight Day Journal.