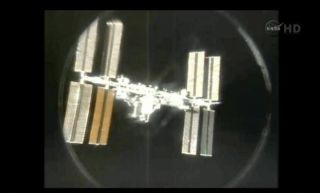 The International Space Station turns slowly to provide a side-view to the shuttle Atlantis after the two spaceships undocked on July 19, 2011 during NASA's final shuttle mission.
(Image: © NASA TV)

HOUSTON — With the space shuttle about to retire for good, NASA's work over the next few years in human spaceflight will be focused on the International Space Station.

The $100 billion football-field size lab is one of the biggest legacies to be left behind by the shuttles; officials say that without Atlantis, Discovery and Endeavour, the project would have been impossible to accomplish.

In that regard the space shuttles have completed their job: The space station is done; all the original modules and features planned for it have been installed. Only one additional Russian module is expected to be added by Russia's Federal Space Agency in the next few years.

But the achievement of the station's completion represents not a finish line, but a start, NASA officials say. [Photos: Space Shuttle Leaves Space Station for Last Time]

"It's been 13 years to get us to this point," Mike Suffredini, NASA's program manager for the International Space Station, said during a Tuesday (July 19) briefing. "But this point was not the end, this was in fact the means to an end. We've assembled this vehicle, and now it's our job to use it."

With the facility complete, crews can now turn their efforts to performing research on the outpost, rather than spending most of their time constructing it. [Graphic: The International Space Station Inside and Out]

Astronauts living and working on the station will now dedicate about 35 hours a week to science, whereas during recent years they have only been able to spare 10 to 20 hours a week, Suffredini said.

"It's going to result in research that's going to benefit humanity and our planet," he said. "The things we're going to learn from ISS, we just don't even know today, we can't fathom yet."

To help the space station reach its full potential for science, NASA recently chose a nonprofit organization — the Center for the Advancement of Science in Space Inc., to be based at the Space Life Sciences Laboratory near NASA's Kennedy Space Center in Florida — to manage all research on the American segment of the outpost.

"The objective of the nonprofit is to go out there and educate wider communities, and get more folks interested in utilizing ISS," Suffredini said.

NASA hopes that private companies will want to join with scientists and engineers to invest in research that could lead to new vaccines, new technologies and other discoveries that will benefit life here on Earth. But the first step in stimulating that research is making researchers aware of the laboratory's potential.

For example, the gravity on Earth affects all growing things, from viruses to butterflies to crystals. When you take that gravity away and perform experiments in the weightlessness of the International Space Station, we can learn a lot about those things that we'd never know on the ground.

"We're trying to tell people it's there," Suffredini told SPACE.com. "A lot of people don’t know its there, sadly enough. And in a lot of cases people don’t know what it can do for them. We need people to know it's an asset out there they can utilize and there's all kinds of benefits if we can figure out how to utilize it."