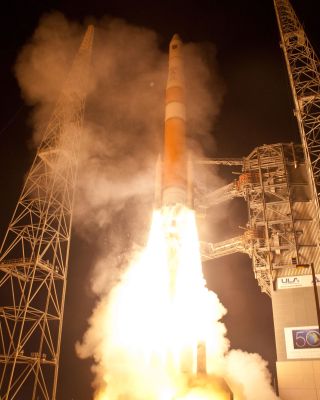 Continuing a prolific partnership that has benefited billions of users around the world, the Delta rocket family today successfully launched its 50th satellite for the Global Positioning System.

The powerful Delta 4 booster blasted away from Cape Canaveral's Complex 37 at 2:41 a.m. EDT (0641 GMT) for a middle-of-the-night ascent precisely timed to deliver a critical replacement satellite directly into the GPS constellation.

It was the type of rocket flight that could appear routine. But replenishing the navigation network is vital to the military forces, civilian consumers and the blossoming commercial marketplace that have come to depend on GPS every day. [Spaceflight Now Photos of rocket launch]

Known as the GPS 2F-2 satellite, this newest bird will take the place of the GPS 2A-11 spacecraft that just celebrated its 20th birthday in orbit, exceeding the wildest expectations for longevity.

That old craft was deployed by a Delta 2 rocket from Cape Canaveral on July 3, 1991, during the heydays of launching GPS satellites at a fast and furious rate.

The Delta 2 booster was conceived in the late 1980s because the Air Force needed a reliable launcher to get its space-based navigation system off the ground. That marriage clicked and the worldwide phenomenon called GPS was born.

From the first launch on Valentine's Day 1989 through its last in 2009, the Delta 2 assembled the entire operational constellation and then sustained it with fresh craft, experiencing only one failure along the way. [Dazzling Nighttime Rocket Launch Photos]

The bigger Delta 4 took over with the next-generation GPS satellite series in 2010 and didn't disappoint the legacy today during its second launch for the system.

"This mission represents the epitome of teamwork and we're proud to have served alongside a dedicated and well-integrated government and contractor team over the last two decades in successfully launching GPS missions for the United States Air Force," said Jim Sponnick, United Launch Alliance's vice president of mission operations.

And while the Delta rockets have grown more capable over the years, the GPS satellites also evolved to improve the system's quality, accuracy and strength.

The newest breed, called GPS Block 2F, is the most advanced yet fielded.

GPS satellites orbit about 11,000 nautical miles above the planet and emit continuous navigation signals that allow users to find their location in latitude, longitude and altitude and determine time. The constellation features six orbital planes with multiple satellites flying in each.

"GPS is a global utility providing highly accurate position, navigation and timing services at no cost to billions of people," said Goodney. "Originally developed for military use, it's since been adopted as the foundation of modern communications. GPS saves lives and enhances quality of living. And adding GPS 2F-2 ensures the constellation will remain robust."

The roots of GPS are firmly entrenched with the U.S. military, which developed the satellites to guide the warfighter with unparalleled exactness.

Ground controllers expect to have the GPS 2F-2 satellite checked out and ready for service about 30 days after launch. It will occupy the Plane D, Slot 2A location of the network.

"The GPS 2F satellites will become the backbone of the GPS constellation over the next 15 to 18 years. GPS 2F satellites continue our modernization efforts to provide new space-based capabilities to ensure GPS remains the gold standard for PNT (position, navigation and timing) information," said Warack.

Boeing's Block 2F series has a dozen satellites in all, with two now in space. The launches are called up when the constellation needs to replace a bird, slowly but surely populating the network with the enhanced features as the aging craft retire.

"I would suspect as we go forward the launch rate will stay fairly low for another year or two, but then will pick up," said Warack.

The next GPS launch is tentatively targeted for September 2012.

"GPS is integrated into every facit of U.S. military operations and we are committed to responsible stewardship of GPS as a global utility," Warack added.