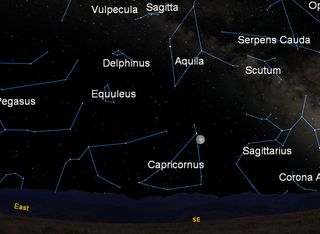 This sky map shows the location of the full moon of July 2011 as it appears at 10 p.m. Local Time in mid-northern latitudes on July 15.
(Image: © Starry Night Software)

The full moon of July occurs tonight, and while there's only one moon around Earth, it goes by a veritable crowd of names.

This month's full moon goes is known as the Hay Moon, Thunder Moon and Mead Moon, not to mention the Buck Moon.  And there are stories behind each lunar moniker.

But first, some lunar basics: The full moon each month is actually an instantaneous event when the  Earth-facing side of the moon is completely lit up by sunlight. For July, this occurred early today (July 15) at 2:40 a.m. EDT (0640 GMT).

But if you missed it, don't fret.

To the casual observer, the moon still appears full to the unaided eye about a day before and after the actual full moon phase. Skywatchers using a telescope, however, can see the border between the lit an unlit portions of the moon, which astronomers call the "terminator." [Infographic: Earth’s Moon Phases Explained]

July's full moon is commonly known as the Full Hay Moon because it's around this time that farmers harvest, bale and stow hay for the winter.  It's also known as the Full Buck Moon to the northeastern Algonquian Native American peoples because the lunar event corresponds to the season when male deer grow new antlers.

There are other names as well.

Because thunderstorms are relatively common this time of year, this months' full moon is also nicknamed the Thunder Moon.  Another name is the Mead Moon, while in Hindi the July full moon is known as Guru Purnima and the Buddhist Sinhala call it Esala Poya.

Tonight's full moon will rise in the southeastern sky and be visible all night long, weather permitting.

The moon will appear in the constellation Capricornus, the Sea Goat, a strange mythical creature that is half-goat and half-fish.

The full moon sky map available here shows how the moon will appear in the constellation Capricornus tonight.