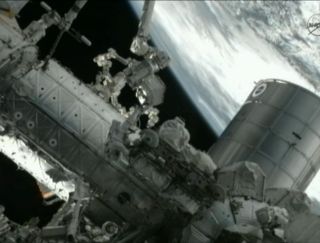 A spacewalking astronaut works to install a new experiment for robotic satellite refueling outside the International Space Station on July 11, 2011 while the Canadian built Dextre robot (top) looks on outside the International Space Station. The spacewalk was the last ever of the space shuttle era and was performed by NASA astronauts Ron Garan and Mike Fossum
(Image: © NASA TV)

Station residents Mike Fossum and Ron Garan conducted the last spacewalk with a visiting space shuttle crew present, making them also the last spacewalkers to enjoy views of a shuttle parked at the massive orbiting complex.

"Why, thank you," one of Atlantis' mission specialists, Rex Walheim replied. Walheim, an experienced spacewalker in his own right, directed Fossum and Garan from Atlantis' flight deck, guiding them through the choreography of today's spacewalk. [Video: Highlights From Final Shuttle Era Spacewalk]

At the beginning of the spacewalk, Fossum and Garan were also treated to views of NASA's Kennedy Space Center in Florida, where Atlantis lifted off on the agency's final shuttle mission on July 8. The space station and attached shuttle swept across the Yucatan peninsula and the Florida coast not long after the spacewalkers floated outside of the station's Quest airlock. [Photos: NASA's Last Shuttle Mission in Pictures]

Today's spacewalk began at 9:22 a.m. EDT (1322 GMT), about 40 minutes behind schedule, but the astronauts powered through their work efficiently and kept up a good pace. Despite the demanding timeline, the astronauts kept things light-hearted and joked around with each other as they worked through the tasks.

Fossum and Garan began the day's work with the most important task: removing a broken cooling pump module from a storage location on the exterior of the station and installing it inside the shuttle Atlantis' large payload bay.

Garan rode on the end of the space station's robotic arm, which was maneuvered from inside the outpost by shuttle pilot Doug Hurley, to retrieve and carry the 1,400-pound (635-kilogram) component over to Atlantis' cargo carrier.

The pump module malfunctioned last summer, bringing down half of the station's cooling system in the process. Three emergency spacewalks were needed to switch out the pump with a spare that was already onboard the outpost. The broken pump will be returned to Earth aboard Atlantis so that engineers on the ground can better understand why it failed.

The spacewalkers bolted the pump module to the back end of the shuttle's payload bay before switching places, with Fossum climbing on the end of the robotic arm for the next task. The spacewalkers then removed an experiment, called the Robotic Refueling Mission, from the orbiter's cargo carrier. The station's two-armed Dextre robot will use this experiment to test technologies that could one day be used to develop a robotic gas station for satellites in orbit.

The end of an era

Flying on the end of the station's Canadarm2, Fossum carried the 550-pound (249-kilogram) satellite refueling experiment to its new home on one of Dextre's platforms on the exterior of the station's Destiny laboratory. As the arm backed him away from Atlantis, Fossum paused to reflect on the significance of this spacewalk's place in history.

"Take a look around, Ronny. You're the last [spacewalking] person in the payload bay of the shuttle," Fossum said.

Garan himself took time to admire Atlantis and the finality of the moment before moving to his next workstation.

"Okay Rex, leaving the payload bay for the last time," Garan radioed to Walheim in the shuttle's flight deck. "Rex, as I leave for the last [time], I want to tell you how much I appreciate all the thousands of people who worked on this vehicle. It is really beautiful back here."

"Yes, it is an amazing vehicle, isn't it?" Walheim said.

Finishing up the day's work

After successfully installing the Robotic Refueling Mission, the station's newest addition, the spacewalkers deployed a materials science experiment, known as MISSE, on the station's backbone-like truss.

The experiment is housed on a platform close to where the Alpha Magnetic Spectrometer, a highly sophisticated particle physics detector, was recently installed during the previous shuttle mission — the shuttle Endeavour's STS-134 flight. The MISSE experiment will be left out for several months to test how different materials react to the harsh environment of space. It will be retrieved and returned to Earth on a later mission and will help engineers with future designs for spacecraft and satellites.

The spacewalkers wrapped up the day's work by fixing a protruding wire on a grapple fixture on the station's Russian segment and placing a protective cover over a docking unit on the port side of the station's Tranquility node to protect it from excess sunlight.

Today's outing was the 160th spacewalk conducted in support of space station assembly and maintenance. It was Garan's fourth spacewalk and fourth time working outside the station with Fossum. The duo previously performed three spacewalks together during the space shuttle Discovery's STS-124 mission in June 2008.

Garan has now spent a total of 27 hours and 3 minutes on spacewalks.

Today's spacewalk was Fossum's seventh time working in the vacuum of space, bringing his hours spent on spacewalks up to 48 hours and 32 minutes. This places him seventh on the list of all-time record holders, just five minutes behind NASA astronaut Mike Fincke.

The space shuttle Atlantis's final mission is devoted to delivering a huge load of supplies and spare parts to the orbiting outpost. Yesterday (July 11), mission managers elected to extend the mission an extra day to give the astronauts enough time to complete all the necessary tasks. Atlantis will now aim to land at NASA's Kennedy Space Center at 5:56 a.m. EDT (0956 GMT) on July 21.

Mission managers met today and cleared Atlantis' heat shield for re-entry into Earth's atmosphere at the end of its mission next week. After analyzing data and images from two separate inspections, ground teams concluded that the orbiter's heat shield remains in good shape and is free of any concerns.