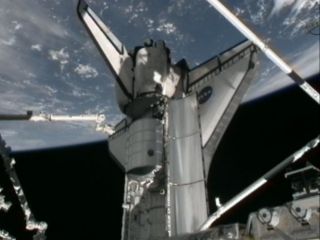 This still image from a NASA video camera on the International Space Station shows the Rafaello cargo module on the International Space Station before it was plucked from the shuttle Atlantis' payload bay and delivered to the station. The cargo pod is packed with tons of supplies to keep the station stocked up for an entire year.
(Image: © NASA TV)

HOUSTON — A piece of space junk from an old Soviet satellite will pose no danger to the International Space Station and the attached shuttle Atlantis, thanks in large part to the weekend docking of the two spacecraft, NASA officials said today (July 11).

"Mission Control has verified that the track of a piece of orbital debris will not be a threat to the International Space Station and space shuttle Atlantis," agency officials said in a statement. "No adjustments to the docked spacecraft’s orbit will be necessary to avoid the debris."

The U.S. military's Space Surveillance Network notified NASA of the wandering piece of space trash yesterday, and the agency began tracking the object's orbit to determine if it would fly uncomfortably close to the station and require some kind of maneuver avoid a collision.

In a news briefing yesterday, LeRoy Cain, chair of Atlantis' mission management team, said that initial assessments estimated that the debris would make its closest approach to the station on Tuesday (July 12) during a scheduled spacewalk by station astronauts Ron Garan and Mike Fossum.

The orbital debris is part of a defunct Soviet satellite called Cosmos 375 and is one of more than 500,000 pieces of space junk that are continuously cataloged and tracked in Earth's orbit, NASA officials said. [Worst Space Debris Events of All Time]

The space station was actually boosted out of harm's way when Atlantis docked at the orbiting outpost yesterday (July 10).

The relative motion of the two spacecraft as they joined together serendipitously pushed the station into a slightly higher orbit, making it unnecessary for mission managers to take any further action, NASA officials said. The space station typically flies in an orbit about 220 miles (354 kilometers) above Earth.

To guard against space junk collisions, NASA maintains a pizza box-shaped safety zone that measures just over 15 miles (25 km) around the space station and about a half-mile (0.75 km) above and below the outpost.

Earth's orbit is littered with spent rocket parts and pieces of broken satellites that range in size, which poses an ongoing problem for spacecraft and satellites that sometimes have to dodge out of the way.

NASA and its space station partners have procedures in place to deal with potentially threatening pieces of orbital debris if they fly within a preset safety perimeter around the station and spacecraft.

With advance notice, thrusters on the space station itself, or attached vehicles such as the shuttle or Russian Soyuz spacecraft, can be used to move the complex to a higher orbit to get out of the way.

NASA and the U.S. military have been studying new ways to reduce or remove the amount of space debris in Earth orbit.

In an April conference on space activities, U.S. Air Force Space Command commander Gen. William Shelton said that if the orbital debris problem is not dealt with properly, the amount of space junk around Earth could triple by 2030.