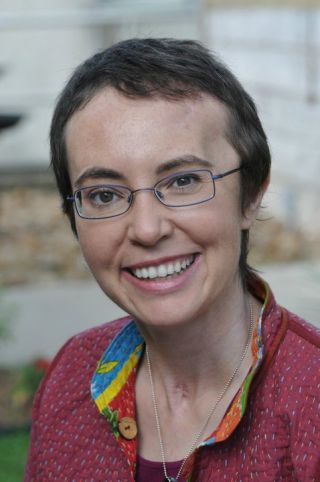 Congresswoman Gabrielle Giffords smiles in the first photos of her released since she was critically injured in a January shooting spree in Tucson, Ariz.
(Image: © P.K. Weis, SouthwestPhotoBank.com)

HOUSTON – Congresswoman Gabrielle Giffords made her first public appearance since January Monday evening (June 28), showing up unannounced at a public event honoring her astronaut husband and his space shuttle crewmates.

Giffords and her husband Mark Kelly attended the public NASA ceremony for the crew of the shuttle Endeavour's final mission STS-134, a flight that Kelly commanded in May. The event was the first time Giffords, D-Ariz., has been seen publicly since she was shot in the head during a January assassination attempt in Tucson, Ariz.

Seated in a wheelchair, Giffords was rolled into the nearly 600-seat theater at Space Center Houston, the visitor center for NASA’s Johnson Space Center (JSC), where her husband was waiting.  It was standing-room only at the packed event. [Gabrielle Giffords Discharged From Hospital]

Upon her unexpected entrance, the audience of space program workers, other astronauts' family members and the public gave her a standing ovation.

Giffords later stood to join another round of applause, this time for her husband after he was bestowed with NASA's Space Flight Medal by JSC deputy director and former astronaut Ellen Ochoa.

The award, which was also given to Kelly's five STS-134 crewmates, honors "significant achievement or service during individual participation as a civilian or military astronaut, pilot, mission specialist, payload specialist, or other space flight participant in a space flight mission."

Following the ceremony, an event that traditionally takes place about a month after all shuttle and International Space Station crews return from space, Kelly and his fellow Endeavour astronauts narrated a slideshow of photos taken during their 16-day flight.

An approximately 14-minute video showing highlights from the mission followed, during which Giffords exited the theater.

The astronauts, including Kelly, stayed on to answer questions from the audience and then to sign autographs. Kelly and his crewmates launched on the shuttle Endeavour on May 16 and flew a two-week mission to the space station.

Giffords smiled as she watched the mission photos displayed on the five-story screen at the front of the theater. Her appearance was similar to the way she looked in photos released by her Congressional office earlier this month.

Last week, Kelly announced he would retire on Oct. 1 from both NASA and the Navy to spend more time with Giffords, including writing their joint-memoirs about the time they spent together before and after she was shot. The book will be published by Scribner and released at a date to be determined.

Giffords was discharged from TIRR Memorial Hermann in Houston on June 15, where she was undergoing rehabilitation since January. She is still receiving outpatient care at the same facility.

She traveled home to Tucson for a weekend earlier this month and in May went twice to Florida to see Kelly launch into space aboard Endeavour. During both trips, she was kept out of the public's view.