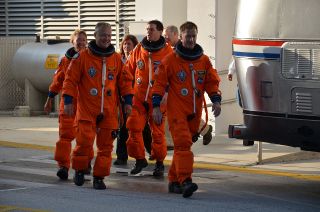 After strapping into their seats on the shuttle's flight deck, Ferguson, together with pilot Doug Hurley and mission specialists Rex Walheim and Sandra Magnus, rehearsed the pre-launch procedures that they will follow on launch day, targeted for July 8 at 11:26 a.m. EDT (1526 GMT).

Their mission, called STS-135, is a 12-day flight to deliver supplies and equipment to the International Space Station. It will be the 135th and last shuttle flight for NASA before the 30-year-old program is retired this year.

But today, the Atlantis crew's mission was to gain familiarity with their spacecraft and the teams that will assist them on launch day. [Gallery: Shuttle Atlantis' Last Launch Pad Trek]

"The biggest thing is that you're working with the whole team down here and actually going through a launch count right up until T-zero," Hurley said during a Wednesday press conference at the launch pad. "You've got your suits, you got your suit techs, you're doing all the motions that you go through on launch day all the way out to the pad."

The training session has been a standard activity for all NASA shuttle missions and is known as the Terminal Countdown Demonstration Test, or TCDT.

"It is just a very comprehensive, hands-on-at-the-place-you're-going-to-do-it kind of training and it is invaluable," Hurley said. "You can do all the simulators in the world but until you get into that real vehicle, touch the vehicle, see what you can reach, see the different switches — everything is just a little bit different when you are in the real vehicle."

"It is a great way to get you ready for the launch day when it counts," he said.

NASA's shuttle launch team started the countdown for today's test at the T-24 hour mark on Wednesday. The simulated liftoff was set for just after 11 a.m. EDT (1500 GMT).

As a standard part of the TCDT, a mock main engine cutoff and abort was called when the count ran out, giving the astronauts a chance to practice bailing out of Atlantis.

The emergency escape was the culmination of several days of contingency training that began soon after the astronauts arrived in Florida on Monday afternoon.

Before today's launch day rehearsal, Ferguson and Hurley practiced landing Atlantis by flying a specially modified Gulfstream jet. They were then joined by their two other crewmates to review procedures to use a slidewire system to evacuate the pad, and took turns driving the tank-like M113 armored personnel carrier they'd use to escape the vicinity of the shuttle.

Following the practice countdown, the astronauts returned to Houston and the Johnson Space Center flying in two T-38 supersonic jets.

Even as the astronauts were undergoing their pre-launch preparations in and around their spacecraft, technicians were busy readying Atlantis to launch in two weeks.

Workers continued to perform X-ray scans of the shuttle's external fuel tank, verifying that its support beams, called "stringers," sustained no cracks during a recent pre-launch test. So far, no issues have been reported.

Technicians were also working on installing a replacement fuel valve for one of Atlantis' three main engines. During the earlier tanking test, engineers saw indications that the valve was leaking liquid hydrogen. A full retest of the valve is set for this weekend.

On Tuesday, NASA's senior management and shuttle team leaders will meet at the Kennedy Space Center to assess preparations for shuttle Atlantis' STS-135 mission. During the readiness reviews, managers will confirm the launch date for the final shuttle mission.

NASA is retiring its remaining three-shuttle fleet this year to make way for a new exploration program aimed at deep space missions to an asteroid and Mars. The shuttles Discovery and Endeavour completed their own final missions earlier this year.