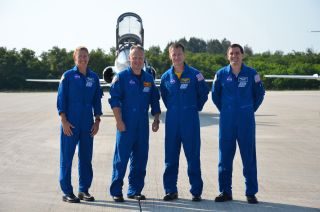 CAPE CANAVERAL, Fla. — The four astronauts who will fly on the last-ever space shuttle mission landed at NASA's Florida spaceport Monday evening (June 20) to participate in a dress rehearsal for their July 8 launch.

Flying in a pair of NASA's T-38 supersonic jets, the crew touched down at 5:30 p.m. EDT (2130 GMT) here at NASA's Kennedy Space Center (KSC), landing on the same runway the astronauts plan to use when they return to Earth at the end of their upcoming mission.

NASA's final shuttle flight, called STS-135, is a 12-day mission on the shuttle Atlantis that will deliver vital supplies to the International Space Station.

“STS-135 is notable, significant for a number of reasons, not the least of which is that it is the last flight. And I don't think that comes as a surprise to anybody,” said Atlantis commander Chris Ferguson after touching down in Florida.

"I think I speak on behalf of the crew, everyone in the Astronaut Office, and I am sure everyone here at KSC, that we are just trying to savor the moment. As our children and our children's children ask us, we want to be able to say 'we remember when, we remember when there was a space shuttle,'" said Ferguson.

"It is a significant mission in addition because usually standing next to the commander here are five or six other people," said Ferguson. "Of course, this is a crew of four and we got a busy mission but we're going to do it with the crew of four. We're going to do a fantastic job."

The four astronauts left Ellington Field in Houston, Texas at just before 2 p.m. EDT (1800 GMT). They stopped over in Mobile, Alabama to refuel before proceeding to their Florida launch site.

Over the next three days, the Atlantis crew  will take part in a number of training activities leading up to their suiting up and climbing aboard the shuttle on Thursday (June 23) to proceed through their pre-launch checklists as a simulated countdown ticks down to just before engine ignition.

The training session has been standard for all NASA shuttle missionsand is known as the Terminal Countdown Demonstration Test, or TCDT.

Before the actual launch day rehearsal on Thursday, Ferguson and Hurley will practice landing Atlantis by flying a specially modified Gulfstream jet. The shuttle astronauts will also undergo training in case there is an emergency on the launch pad, as well as review procedures to use a slidewire system to evacuate the pad and will take turns driving a tank-like armored personnel carrier.

Now positioned for launch, the Raffaello logistics moduleis packed with more than 8,000 pounds (3,628 kilograms) of supplies and equipment for the space station. A separate experiment platforms is also packed in Atlantis' payload bay.

The 50-foot (15-meter) beams, called "stringers," were being inspected to ensure no cracks formed during a recent fueling testthat filled the orange-brown tank with super-cold propellants subjecting it to the same super-cold temperatures it will experience on launch day.

Atlantis' upcoming mission will be the 135th and last shuttle mission for NASA since the fleet began launching into orbit in April 1981.

NASA is retiring its three-shuttle fleet this year to make way for a new exploration program aimed at deep space missions to an asteroid and Mars. The shuttles Discovery and Endeavour completed their own final missions earlier this year.