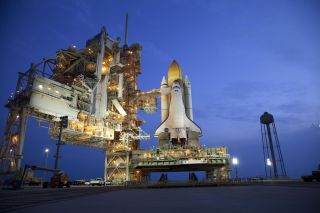 In July, NASA's last space shuttle mission in history will blast off from Florida on one final mission before the storied 30-year program is retired for good. But the program will leave an untold number of memories behind for NASA and the public.

Share your favorite space shuttle memories here in our comments section below.

To get started, here is my first memory of seeing the shuttle Atlantis, which will launch on the last shuttle flight on July 8:

The first time I saw Atlantis up close, I was actually waiting for another space shuttle launch. It was in July 2005 and NASA was trying to launch its first shuttle mission (STS-114 on Discovery) since the loss of Columbia and its crew two years earlier.

But there was a two-week delay for that return-to-flight mission because of faulty fuel tank sensors and the press pool, like the rest of the country, was in a holding pattern until NASA sorted it out. (Discovery launched on that mission on July 26, 2005.)

In the meantime, NASA moved Atlantis from its hangar (called the Orbiter Processing Facility) to the massive Vehicle Assembly Building to prepare for its next flight, and took the press pool out to witness the event.

I still remember how hot it was (sweltering), and how large Atlantis — like all NASA shuttles — really is.

Even without its external tank and solid rocket boosters, the orbiter is huge. It stretches 122 feet from the nose to the main engines in the rear. You can fit a bus inside its payload bay and it has to ride on custom-built vehicles just to move less than a mile from one building to the next.

At the time, Atlantis was the first shuttle I had a chance to see altogether since taking over the human spaceflight beat in 2004. (A tour in 2004 did take me into the shuttle Endeavour's hangar, but it was obscured by scaffolding and access walks, so all you saw were wheels and the belly.)

And of course, Atlantis had special meaning for me for another, somewhat embarrassing reason: it was the shuttle those kids launched into orbit in the 1986 movie "Space Camp." I was 9 years old back then, and I watched that movie over and over in the theater, then again on TV and eventually went to the real Space Camp in Huntsville, Ala.

So the first time I saw Atlantis rolling over to the VAB, all those childhood memories came flooding back, on top of my knowledge of the shuttle's legacy of missions dating back to its first flight on Oct. 5, 1985. They flooded back again in September 2006, when I saw Atlantis blast off on the very mission I saw it being prepared for earlier.

I'm not sure what to expect in July when I watch Atlantis soar into space along with the rest of the press pool and the hundreds of thousands expected to turn out for the event. But that first view of the shuttle with my own eyes will likely be close at hand.

So that's my first memory of Atlantis. What's yours? You can share your favorite space shuttle memories about any mission by adding a comment below.