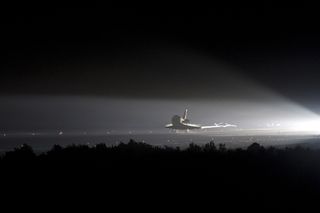 Space shuttle Endeavour makes its final landing at the Kennedy Space Center's Shuttle Landing Facility, completing a 16-day mission to the International Space Station on June 1, 2011. The shuttle's STS-134 mission was its final flight before being retired.
(Image: © NASA/Bill Ingalls)

CAPE CANAVERAL, Fla. – With the safe landing today of shuttle Endeavour after its final mission in space, NASA is another step closer to a looming deadline: the very last flight of the agency's storied space shuttle program.

Endeavour landed today at NASA's Kennedy Space Center at 2:34 a.m. EDT (0634 GMT) to end a 16-day mission to the International Space Station. Yet in a symbolic handover, as Endeavour's wheels rolled to a stop on Runway 15 on this morning (June 1), another shuttle — Atlantis —  made its last slow crawl to the launch pad for its own final mission in early July.

NASA is hoping to launch Atlantis on July 8 on a 12-day resupply mission to the International Space Station. Four astronauts – commander Chris Ferguson, pilot Doug Hurley and mission specialists Sandy Magnus and Rex Walheim – will fly Atlantis on what will be the grand finale of NASA's shuttle program. [Most Memorable Space Shuttle Missions]

Endeavour's STS-134 flight was the orbiter's 25th and final mission, and delivered a $2 billion astrophysics experiment and extra supplies to the orbiting complex. Atlantis' flight will be STS-135, the 135th and last ever mission for the shuttle program after more than 30 years of spaceflight.

Rolling to the launch pad

"Seeing Atlantis roll out was really when it started to hit me that we're never going to see that again," Mike Moses, chair of the shuttle mission management team, said in a news briefing today.  "So that was a pretty big, emotional event. But again, it was tempered with turning around and focusing on landing." [Photos: Shuttle Atlantis' Last Launch Pad Trek]

Having two shuttle milestones within close proximity to one another was a unique and special event that drew large crowds and also served as a poignant reminder of the program's imminent end.

"It's a very good day today, and I really want to thank the folks down here for all the dedication and hard work they put in," said NASA's space operations chief Bill Gerstenmaier.

The plan for the future

After Atlantis returns to Earth, NASA's space shuttle program will officially come to a close. NASA is ending its 30-year shuttle program to focus on developing new spaceships and rockets for exploration beyond low-Earth orbit, such as missions to an asteroid, the moon or Mars.

Yet, until the next generation vehicles are ready, NASA faces a gap in human spaceflight during which time the agency will have to rely on Russian-built Soyuz spacecraft to reach the International Space Station.

And while the legacy of the space shuttle program will live on, the program's retirement will also signify the end of an iconic part of the country's space program.

"I think we're losing that piece of identity," Walheim said. "That is a quintessential American vehicle. You point to that and people know it's from the United States."

Reaching farther out into the cosmos

But, to build upon the achievements of the space shuttle program and to advance human exploration, requires NASA to push further out into the solar system, he said.

But, the space shuttle era will always be remembered as a critical chapter in the nation's history, and Atlantis' upcoming STS-135 flight will be a part of that rich heritage.

"I think we can look back and really take the sweet part of all this and say that we are blessed to have been a part of it – all of us, not just the chosen few who are lucky enough to fly it," Ferguson said. "As a country, I think we can look back and say, 'I remember when we flew the space shuttle and I remember the proud moment I felt when I felt the rumble in my chest when I watched the space shuttle launch, and I long for those days again.'"