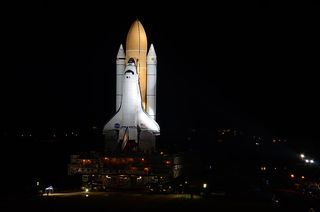 The space shuttle Atlantis rolls out to Launch Pad 39A in preparation for its final launch in July.
(Image: © collectSPACE.com / Robert Z. Pearlman)

CAPE CANAVERAL, Fla. – Like a winged sentinel gleaming in white, the orbiter Atlantis made one last trek to the launch pad tonight (May 31) to prepare for its July 8 blastoff — a final voyage for NASA after 30 years of space shuttle flights.

The 3.4-mile (5.2-kilometer) journey to the seaside pad atop NASA's Apollo-era crawler transporter typically takes about six hours. Tonight's move, which was delayed slightly due to a hydraulic leak on the massive carrier, is the last trip any shuttle will take to the launch pad, since NASA will retire its space shuttle after Atlantis' flight. [Most Memorable Shuttle Missions]

Thousands of spectators turned out to watch Atlantis move to the pad for the very last time, and the four astronauts who will fly the shuttle's mission, which NASA calls STS-135, were on hand to mark the historic event.

"We couldn't be more honored to be here and share it with them," pilot Doug Hurley told reporters during the rollout event. "Obviously, the priority for us is to safely accomplish the STS-135 mission, but I think, almost as strong, is to just be able to share this experience with the folks who have worked on this vehicle for 30-plus years. We wouldn't be anywhere else but here tonight, so we're very honored to be here."

Atlantis, the second oldest of NASA's space shuttles still flying, is scheduled to launch on the shuttle program's final mission no earlier than July 8. An official launch date will be announced by mission managers following a Flight Readiness Review on June 28.

The historic flight will be the 135th and final mission of NASA's space shuttle program, which began flying in 1981.

With the shuttle program winding down, NASA employees have been able to invite family and friends to watch the shuttles roll to the launch pad for their final missions. The unique opportunity helps to boost morale as the program comes to a close, but also allows the shuttle workers to share the fruits of their labor with loved ones, NASA officials have said.

For the astronauts who will fly Atlantis on its final mission, paying tribute to these architects of the agency's 30-year shuttle program is important. [NASA's Space Shuttle – From Top to Bottom]

"It's really hard to say goodbye to the program, but on the other hand, look at the great things that we've accomplished and look what we can do with that in the next era," Magnus said. "Look at this vehicle that's been flying for 30 years with a versatility that is just incredible. Just imagine what we can do with that kind of a legacy and how we can move forward and what we can do next. So, it really does have a range of emotions as you watch this majestic vehicle go out to the launch pad for the last time."

During Atlantis' 12-day flight, the shuttle will deliver an experiment "to demonstrate and test the tools, technologies and techniques needed to robotically refuel satellites in space – even satellites not designed to be serviced," NASA officials said in a statement.

The astronauts will also retrieve an ammonia pump that failed on the space station in July 2010. The failed pump module will return to Earth aboard Atlantis so that engineers can understand why the component failed.

Commander Chris Ferguson, pilot Doug Hurley and mission specialists Rex Walheim and Sandy Magnus will also retrieve an ammonia pump that failed on the space station in July 2010. The failed pump module will return to Earth aboard Atlantis so that engineers can understand why the component failed.

STS-135 will be Atlantis' 33rd and final mission before it is retired, along with the rest of the agency's orbiter fleet.

Another shuttle set to land

Before Atlantis moved an inch toward its launch pad, the grounds at Kennedy Space Center were teeming with activity since another shuttle, Endeavour, is slated to land early Wednesday morning at the Florida spaceport.

Endeavour and its six-astronaut crew are scheduled to touch down on Runway 15 at the Shuttle Landing Facility at 2:35 a.m. EDT (0635 GMT) on Wednesday. [Photos: Shuttle Endeavour's Final Mission]

NASA is retiring its 30-year shuttle program to focus on building spacecraft and launchers for future exploration missions beyond low-Earth orbit, such as to an asteroid and Mars.

Once Atlantis returns from its final flight, all three space-flown orbiters — Discovery, Atlantis and Endeavour — will be retired to museums for public display.

Atlantis, for its part, will stay in its Florida homeport. NASA is sending the shuttle to the Kennedy Space Center Visitor's Complex next door to the agency's launch site.