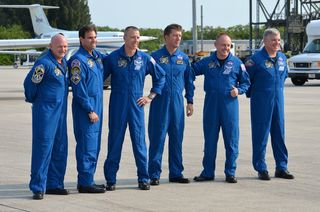 CAPE CANAVERAL, Fla. – The six astronauts who will fly space shuttle Endeavour's final mission returned to Florida today, hoping next Monday's scheduled second-try at their launch is the trick.

"We are really excited to be here, excited to launch, hopefully on Monday if the weather holds," STS-134 mission commander Mark Kelly said after arriving at the Kennedy Space Center.

"I can't think of more perfect way to spend my birthday than to come here and fly over here with my crew and get ready to fly Endeavour next week." said Johnson.

They touched down on Kennedy's Shuttle Landing Facility, where Kelly plans to return Endeavour for a final time from space on June 1, assuming a May 16 liftoff.

The crew's family members plan to arrive later this week.

"Our families will be down later in the week. Normally we'd have them come down typically on the same day we come down but all of our kids, all of them are in school," said Kelly. "So they'll be down over the weekend, even though I am sure they would rather be here in Florida now."

Kelly's wife, Congresswoman Gabrielle Giffords, D-Ariz, is expected to fly in separately. Giffords is recovering from a gunshot wound to her head after a Jan. 8 assassination attempt in Tucson, Ariz.

This marked the second arrival for the astronauts, who originally came to Florida on April 26. They returned home to Houston and NASA's Johnson Space Center on May 1 after Endeavour's first launch attempt on April 29 was scrubbed.

A short in a heater circuit associated with Endeavour's hydraulic system resulted in the launch being postponed. Technicians determined the most likely failure was inside a switchbox in the shuttle's aft compartment and associated electrical wiring connecting the switchbox to the heaters. The heater circuits prevent freezing of the fuel lines providing hydraulic power to steer the vehicle during ascent and entry.

The faulty switchbox was replaced on May 4. Technicians then installed and tested new wiring bypassing the suspect electrical wiring and confirmed that the heater system was working properly.

"We really appreciate all the hard work by the team that's worked over the last couple of weeks to get shuttle Endeavour ready," said Kelly.

The doors to Endeavour's rear compartment were closed on Wednesday in preparation for the launch team picking up the countdown on Friday at 7 a.m. EDT (1100 GMT). Endeavour is scheduled to liftoff on Monday, May 16 at 8:56 a.m. EDT (1256 GMT) to the International Space Station. [Photos: Shuttle Endeavour's Final Voyage]

The 16-day mission will deliver the Alpha Magnetic Spectrometer (AMS) — a state-of-the-art cosmic ray particle physics detector to examine fundamental issues about matter and the origin and the structure of the universe — and the ExPRESS Logistics Carrier 3 (ELC3) carrying spare station components. The STS-134 mission includes four spacewalks, the final scheduled spacewalks by shuttle astronauts.

"We feel that the AMS, along with the International Space Station, are great symbols of what we human beings can do when we work together constructively. Our crew is very proud to be part of this great endeavor," said Fincke.

Endeavour's STS-134 mission is the second-to-last for NASA's 30-year space shuttle program. A final flight by space shuttle Atlantis, STS-135, is targeted to launch in mid-July before the fleet is retired and sent to museums for display.