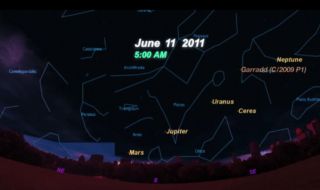 In May and June 2011, four planets will converge in the night sky.
(Image: © Starry Night Software)

During this month of May, four bright planets will engage in a fascinating dance with each other in the morning sky.

Mercury, Venus, Mars and Jupiter will be involved in a series of conjunctions, joined at the end of the month by a very thin, waning crescent moon.  We could even refer to this as a "celestial summit meeting," or more precisely, a series of summit meetings during May 2011.

Twice during May three planets will converge to form a "trio."

According to Belgian calculator Jean Meeus, a trio is when three planets fit within a circle with a minimum diameter of 5 degrees.  Such a limit was one that Meeus chose more or less arbitrarily, but as he notes, "We have to make a choice."

On Wednesday (May 11), Mercury, Venus and Jupiter will converge within 2.05-degrees of each other, followed just 10 days later by another trio, this time formed by Mercury, Venus and Mars, which will crowd within a 2.13-degree circle.  Then late in the month, on three successive mornings, May 29th, 30th, and 31st, the waning crescent moon will arrive, sweeping past Jupiter, Mars, Venus and Mercury stretched out across the eastern night sky from upper right to lower left. [Video: See the Moon and Planet Alignments through June]

What might ancient sky watchers from 500 or 1,000 years ago have ascribed to such a series of gatherings as this?

Most likely, they would have felt a mixture of fear and wonder.  A fine example was a case in 1186 A.D. when an unusual gathering of the five planets visible to the naked eye resulted in a near-panic across the whole of Europe after religious leaders predicted that worldwide disasters would result!

Even today, in our modern world, similar fears sometimes arise.

You need only Google-search the date May 5, 2000, and you will find a number of different websites that predicted a variety of disasters attributed to the combined gravitational and tidal forces associated with a gathering of the sun, moon, Mercury, Venus, Mars, Jupiter and Saturn.

One website proclaimed that it would be "one of the most exciting, powerful and transformative celestial events of our millennium according to astronomy and astrology experts."

In many ways, these words sound all too similar to the hype and tripe that has been bandied about during these past few years concerning the Mayan Long Count calendar in 2012.

Needless to say, we all survived the recent 2000 celestial summit and despite what you might hear or read in the coming days ahead, absolutely nothing cataclysmic will take place (at least nothing that can be directly attributed to this impending dawn gathering of the moon and planets).

The only tragedy regarding this display is that those living north of the equator will have a difficult time seeing it.

At first glance there doesn't appear to be any problem concerning the visibility of these objects.  Their elongations from the sun will range from 18 degrees to 26 degrees, which should place them all in dark skies.  Unfortunately, during May, as seen especially from mid-northern latitudes, the ecliptic is oriented at a shallow angle relative to the eastern horizon at dawn.

As a result, the moon and planets will rise into view during late twilight and will lie very low to the east-northeast horizon by sunrise. To see them, you'll have to make sure not to have any potential obstructions to your visibility such as trees or buildings in that direction.

But coming above the horizon so near to sunrise will also mean that you'll have a fighting chance of catching only Venus (magnitude -4) and Jupiter (magnitude -2) with unaided eyes.  Whether you will be able to glimpse zero-magnitude Mercury is debatable, and certainly binoculars will be needed if you have any hope of seeing Mars (magnitude +1).

The crescent moon will also prove to be a visual challenge, being only 2 percent illuminated on May 31.  Low-lying clouds or haze near the horizon on any given morning will only reduce your chances of success.

In contrast, those of our SPACE.com readers in the Southern Hemisphere, where the ecliptic at dawn appears at a somewhat steeper angle, will see this ever-changing array somewhat higher and in a somewhat darker sky; more like mid-twilight as opposed to late twilight in the north.

Indeed, those living in far southern locations such as Cape Town, South Africa; Melbourne, Australia; or Dunedin, New Zealand, will have a much better chance of seeing and enjoying this month-long dance of the planets.