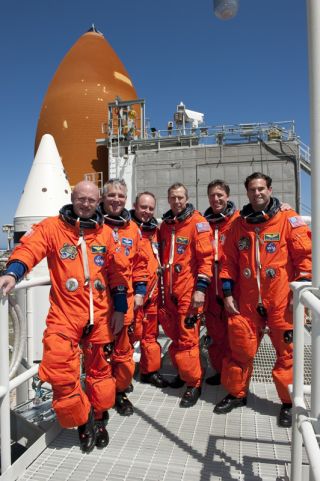 With the space shuttle Endeavour's launch delayed by at least a week, the astronauts who will fly the orbiter on its final mission have returned to Houston to resume training until their scheduled liftoff.

NASA called off a launch attempt on April 29 when an issue was detected with a power system, called an auxiliary power unit, which is located in the shuttle's rear, or aft, section.

In a press briefing held yesterday (May 1), agency officials outlined the repair work that will need to be done to the power system. A new official launch date has not been set, but May 8 is being targeted as the earliest opportunity. [Photos: Shuttle Endeavour's Final Voyage]

"The purpose is to stay away from any contagious illnesses that would take a few days to show up and manifest," Moses said. "The crew reports to a quarantine facility that is on-site at Johnson Space Center – astronaut crew quarters."

"It's just refresher training," NASA spokesperson Kylie Clem told SPACE.com. "They'll be doing another simulation with their ascent and entry with flight control teams, but it's a light schedule."

And while the delay gives the spaceflyers some extra free time, the crew tends to use it to study up for the mission ahead, NASA officials said. [Gallery: Space Shuttle Endeavour Construction Photos]

"The crews are unbelievably dedicated," Moses said. "They don't do anything in their free time other than study their checklists and practice their procedures. They put their time in to be ready to go, that's for sure."

Endeavour is slated to fly its final mission to the International Space Station for a two-week trip to deliver a $2 billion particle detector aimed to study dark matter and other mysteries of the universe. The shuttle and its crew will also haul a platform packed with spare parts for the orbiting laboratory. Four spacewalks are planned.

After Endeavour's flight, NASA has one more space shuttle mission planned before the end of the program: the June 28 launch of shuttle Atlantis.