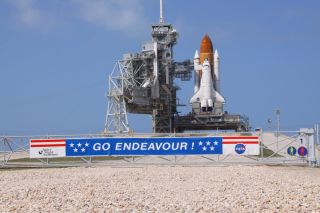 It seems like everyone wants to witness one of NASA's last space shuttle launch, and today's planed liftoff of the shuttle Endeavour is no exception. NASA has a long list of VIP guests for Endeavour's afternoon launch, and even Hollywood found a way to nab seats for the launch.

According to NASA's official list, the space agency has invited no less than 118 VIP guests, with some of those invitees – such as President Barack Obama and his family – representing more than one person. That may not be as long as the royal wedding guest list, but it's a substantial number for NASA.

Of course, this guest list is just one set of VIPs; the space agency expects more than 700,000 spectators in all to turn out at various locations all around its Kennedy Space Center in Cape Canaveral, Fla. Liftoff is set for 3:47 p.m. EDT (1947 GMT) today.

Some folks aren't even on the list: Actors Levar Burton (one of the stars from TV's "Star Trek: The Next Generation") and Seth Green managed to snag tickets to NASA's official "Tweetup" for Endeavour's STS-134 mission. The a social networking event for Twitter followers at the Kennedy Space Center Press Site is part of NASA's public outreach efforts.

Arizona Congresswoman Gabrielle Giffords, who is the wife of Endeavour commander Mark Kelly and is recovering from a gunshot wound to the head, is also attending and is listed among the congressional guests.

1. The President, Mrs. Obama and Family

5. Carlos Monje, Jr.  Special Assistant to the President and Chief of Staff of the Domestic Policy Council

22.  Lt. Gen. John Koziol, Deputy Under Secretary of Defense for Joint and Coalition and Warfighter Support and Director of the Department of Defense Intelligence, Surveillance, and Reconnaissance Task Force

103. Bernard Belloc (France), Scientific Advisor to the President of the French Republic

104. Alexander Rumiantsev (Russia), Ambassador of the Russian Federation to Republic of Finland

115. Honorable Paula A. Cox, The Premier of Bermuda

117. Mr. Jorge Barrero:  Chief of Cabinet of the Minister

118. Mr. Carlos Martínez, Director General for International Cooperation of the Ministry of Science and Innovation, Mexico

These lists are typically valid only for the launch day they are provided for. Any delays or changes to the launch can change who is able to attend, NASA officials have said in the past.

Endeavour will fly to the International Space Station for a two-week visit to deliver a $2 billion astrophysics experiment designed to hunt for exotic subatomic particles. Four spacewalks are planned.

After this mission, NASA plans to launch only one more shuttle flight. That mission will fly on the shuttle Atlantis and is currently slated to launch on June 28.