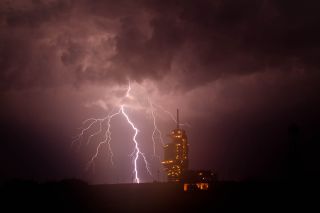 The space shuttle Endeavour is seen on launch pad 39a as a storm passes by prior to the rollback of the Rotating Service Structure (RSS), Thursday, April 28, 2011, at Kennedy Space Center in Cape Canaveral, Fla.
(Image: © NASA/Bill Ingalls)

A barrage of thunderstorms and lightning in Florida created a spectacular backdrop for the space shuttle Endeavour late Thursday in striking photos taken on the eve of the spacecraft's final launch.

The stunning snapshots show Endeavour atop the seaside Launch Pad 39A at NASA's Kennedy Space Center in Cape Canaveral, Fla., as bolts of lightning light up the cloud-filled sky above. For those brief instants, the lightning cast an eerie purple glow over the shuttle and launch pad. [Photo of Endeavour and lightning]

NASA photographer  Bill Ingalls snapped the photos, which the space agency posted online, during a series of storms that temporarily stalled efforts by shuttle technicians to prepare Endeavour for its planned launch on Friday, April 29, at 3:47 p.m. EDT (1947 GMT).

The storms delayed work for at least three hours, during which time Endeavour was protected from the harsh weather by its shroud-like Rotating Service Structure. Inspection crews will take a close look at the shuttle for any signs of damage from the storm. [Photos: Shuttle Endeavour's Last Mission]

Endeavour will launch on its 25th and final mission when it blasts off from the Kennedy Space Center Friday afternoon. The shuttle will fly a 14-day mission to deliver a $2 billion astrophysics experiment and several spare parts to the International Space Station. Four spacewalks are planned.

Endeavour's STS-134 mission is NASA's next-to-last orbiter flight before the space agency retires its 30-year-old space shuttle program for good. The launch is expected to draw a record crowd, with more than 700,000 spectators anticipated to watch Endeavour lift off on its final voyage. [Gallery: Building Space Shuttle Endeavour]

President Barack Obama, his wife Michelle and daughters Malia and Sasha are expected to watch Endeavour's launch. Arizona Congresswoman Gabrielle Giffords, who is the wife of Endeavour's commander Mark Kelly and is recovering from a gunshot wound to the head, is also attending the launch.

Once Endeavour completes its final mission, NASA will send the orbiter to the California Science Center in Los Angeles to be displayed to the public. After this mission, the space agency plans to launch just one more shuttle flight – a June mission using the shuttle Atlantis.