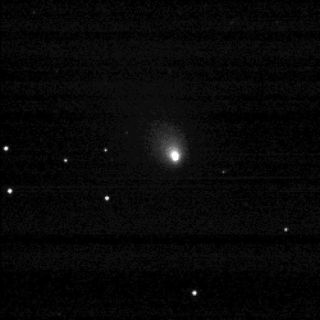 CAPE CANAVERAL - DeepImpact is on track to smash its impactor into a comet July 4, but itshigh-resolution camera's focus is still imperfect.

"The state of thespacecraft is excellent," project manager Rick Grammier said of the $330million NASA mission. "All systems are nominal."

Deep Impact has two moremaneuvers planned to make sure it's on target. The spacecraft will release itssmart impactor a day before the collision, set for 1:52 a.m. EDT on July 4, atime that could change slightly as the encounter approaches.

The only disappointment sofar is the High Resolution Instrument, the telescopic camera that was toprovide detailed pictures of Comet Tempel 1 and the impact.

It will still takepictures, but their clarity will be reduced by a factor of four, close to thequality of those provided by the Medium Resolution Instrument on the flybyspacecraft, Grammier said. There's also a targeting camera on the impactor.

Still, they'll be the bestimages taken of a comet, he said, and the team has high hopes that computerprocessing of the pictures will help. "We're pretty confident . . . thatwe can get essentially back to what they originally expected," he said.

The blurriness is stillunder investigation, but a possible cause may lie in optics used to test thecamera's focus before flight.

"I've got the teamconcentrating on the end game right now," Grammier said.

Deep Impact's images of thecollision and the resulting debris are expected to unveil the ancient guts ofthe comet, which is thought to have come from the primordial, icy bodies of theKuiper Belt, on the edge of the solar system.

"They're veryconfident," Grammier said of his team. "We're all getting veryexcited, because we know it's coming down to the impact time, so it's a lot ofyears of previous work that everybody's looking forward to seeing the fruitsof."

Published under license from FLORIDATODAY. Copyright ? 2005 FLORIDA TODAY. No portion of this materialmay be reproduced in any way without the written consent of FLORIDA TODAY.