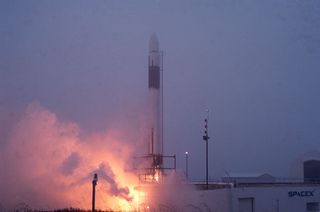 The Falcon 1 rocket, developed by SpaceX, fires its first stage engine during a test at Vandenberg Air Force Base in California.
(Image: © SpaceX.)

Rocket-launch newcomerSpace Exploration Technologies Corp. today accomplished a critical enginefiring at California'sVandenberg Air Force Base, a long-awaited event that puts the company muchcloser to its inaugural blastoff later this summer.

The low-cost,privately-developed Falcon 1 rocket is the creation of ElonMusk, the South African spending his own cash to bring the new launcher fromthe drawing board to reality. Musk was co-founder of PayPal,the online payment system, and earlier the Zip2 software company.

"Today we completedthe largest milestone remaining before launch," Musk, the CEO of SpaceX, said in a statement.

"In a few months, wewill receive Air Force clearance to fly and Falcon 1 will make its maidenvoyage. With the lowest cost per flight in the world for a production rocketand superlative design reliability, it has the potential to be the world leaderin launches per year."

Using a tiny launch teamcompared to the standing armies typically involved with the rocket countdowns,a seven-person control team, a five-person pad crew and three extra techniciansperformed today's engine firing. The nerve center overseeing the operation was SpaceX's mobile command trailer parked on Vandenberg'sSouth Base -- about five miles from the pad -- that tapped into theinstallation's fiber lines and Range communications loops.

Themulti-hour countdown featured the loading of fuels into the rocket's firststage, only the third time that's happened at the new Falcon pad. The SpaceX-developed main engine, dubbed Merlin, burnssuper-cold liquid oxygen and a highly-refined keroseneto generate over 71,000 pounds of thrust.

"A significant amountof our objectives are centered around learning how to operate on a Range,specifically Vandenberg Air Force Base. We have fired the engine many, manytimes at our propulsion test facility in Texas.So just firing the engine is not essentially a primary objective. However,firing that engine at Vandenberg with a brand new system of (ground supportequipment) is really important," SpaceX launchdirector Tim Buzza explained in an interview beforethe test.

As clocks entered the finalmoments, the engine ignition sequence was triggered. Two earlier attempts overthe past couple of weeks to perform this test were halted in the last seconds-- first by a faulty engine ignitor pressure sensor,and then by a mis-configured launchpad helium valve that was shut when it should have been open.

But all appeared to goaccording to plan today. Merlin started igniting around T-minus 2.3 seconds asthe main propellant line was opened, two internal ignitorsfired off and helium spun-up the engine's turbopump.

Merlin roared to fullthrottle as the countdown passed the T-0 point when the rocket would beunleashed on launch day. Falcon would not fly today, however. After running attop power for about three seconds and allowing computers to verify internalchamber pressure, thrust levels and the status of systems, the engine wascommanded to shut down.

The fiery event was calleda success, proving that the SpaceX team and itshardware are ready for primetime.

Crews tilted the rocketinto a horizontal position using its erector trailer this afternoon, removingthe vehicle from the pad mount. Remarkably, the vehicle was being driven backto SpaceX's manufacturing center near Los Angeles tonight -- ahalf-day after firing its engine.

SpaceX has minimal facilities at thelaunch site, preferring to do virtually all of its work off base.

Once back in the factory,technicians will remove the Merlin engine for shipment to Texas to undergo final checks. Also, the twostages that make up the rocket will be separated apart. The second stage'sengine has not been installed yet -- it is still undergoing acceptance testingin Texas, Buzza said.

A specific launch date forthe debut mission is uncertain. The Air Force doesn't want the liftoff to occuruntil after a Titan 4 rocket flies from nearby Space Launch Complex-4 East atVandenberg to deliver a classified spy satellite into orbit. Falcon'strajectory would take it over the Titan facilities, something the militarywants to avoid until after the rocket and its top-secret payload have departed.

Buzza said Falcon could be ready forlaunch within a week of the Titan's liftoff, which is expected no sooner thanmid-July.

SpaceX's customer for the first Falconflight is the U.S. Department of Defense. The small TacSat-1 experimentalcommunications satellite, built by the Naval Research Laboratory, will becarried into space.