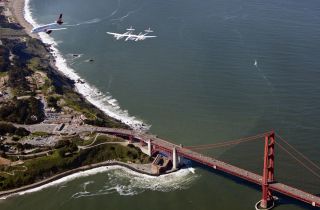 Virgin Galactic's private SpaceShipTwo spacecraft and its mothership WhiteKnightTwo flies over the Golden Gate Bridge with the Virgin America plane "My Other Ride is a Spaceship" on April 6, 2011 en route to open Terminal 2 at San Francisco International Airport.
(Image: © Mark Greenberg/Virgin America)

A private spaceship built for the space tourism firm Virgin Galactic took to the sky above San Francisco Wednesday (April 6) to help christen a sister company's new terminal at the city's international airport.

The spacecraft, called SpaceShipTwo, flew into San Francisco International Airport (SFO) with its mothership WhiteKnightTwo to mark the opening of the airport's new Terminal 2, where Virgin America – a California-based sister company to Virgin Galactic – will serve as an anchor tenant. The Virgin America aircraft "My Other Ride Is a Spaceship" accompanied the SpaceShipTwo and its carrier into the airport. [See photos of SpaceShipTwo over San Francisco]

"Virgin America has the most advanced and carbon-efficient commercial fleet in the U.S. and when it touches down today at its new home it will share the runway with the future of commercial aerospace – SpaceShipTwo and WhiteKnightTwo," said George Whitesides, Virgin Galactic's President and CEO, in a statement. "We’re proud that two Virgin-branded companies can link the cutting-edge present to the future of commercial aviation. It is also fitting that today’s flights are helping to inspire the next generation of scientists, engineers and aviators."

SpaceShipTwo is a civilian spaceship that offers trips to suborbital space and back for ticket-paying customers. [Vote Now! The Best Spaceships of All Time]

The spacecraft is expected to launch six passengers and two pilots 62 miles (100 km) above Earth, offer several minutes of weightlessness and stunning views of the Earth below, and then glide back to a runway landing. Tickets cost $200,000 per seat.

Virgin Galactic has been flying a series of drop tests with SpaceShipTwo and is expected to carry out the first powered flight test – using the craft's rocket engine – sometime this year.

The new Terminal 2 at SFO is a 640,000-square foot facility designed to mirror Virgin America's trademark service with a "Recompose" lounge to help travelers feel at home while awaiting flights, dining areas with organic and local fare, wireless Internet availability and elevated computer work tables. The terminal features a sustainable, green design and aims to be the first Leadership in Energy and Environmental Design (LEED) Gold-certified airport terminal in the United States, Virgin America officials said.

Virgin America will share the terminal with American Airlines.

“Virgin is known around the world for product innovation that improves the customer experience. I am proud to see Virgin America grow into a new home that allows them to extend that unique Virgin experience from the aircraft to the airport,” said Virgin Group Founder Sir Richard Branson.

Branson flew into SFO aboard the Virgin America Airbus 320 "My Other Ride Is a Spaceship," a new aircraft in the airline's fleet. Virgin Galactic's first SpaceShipTwo vehicle is called the "VSS Enterprise," with its WhiteKnightTwo carrier named "Eve" after Branson's mother. [Photos: SpaceShipTwo Makes First Glide Flight]