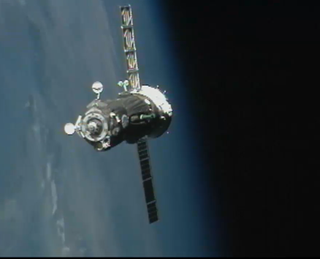 A Russian spaceship bearing the name of history's most famous cosmonaut docked at the International Space Station late Wednesday  (April 6) to deliver three new crewmembers to the orbiting lab.

The Soyuz TMA-21 — nicknamed "Gagarin" after Yuri Gagarin, who became the first person in space on April 12, 1961 — successfully docked with the station's Poisk module at 7:09 p.m. EDT (2309 GMT). The spacecraft had launched from Baikonur Cosmodrome in Kazakhstan on April 4, blasting off from the same pad used for Gagarin's historic flight nearly 50 years ago.

"Contact and capture — docking confirmed," a NASA official announced as the "Gagarin" sidled up to the orbiting lab.

The "Gagarin" launched into space Monday (April 4 EDT) carrying  two cosmonauts and one NASA astronaut to join three other crewmembers already aboard the station, rounding out the orbiting lab's Expedition 27.

The three spaceflyers — NASA's Ron Garan and Russians Alexander Samokutyaev and Andrey Borisenko — will also stay on as part of the next station mission, Expedition 28.

"It was a great couple of days and we're ready to get to work," Garan said.

The crew received a flood of congratulatory calls from Russia's Mission Control center near Moscow after docking at the space station. Russian space official and the families of the astronaut and cosmonauts were on hand to wish the crew well.

"We love you," Garan's wife Carmel told her husband and his crewmates after their arrival on the station. "We'll keep the fires burning at home, and we'll welcome you home with open arms at the end of your successful mission."

All three spaceflyers — and the "Gagarin" — will stay at the space station until September, when they'll come back down to Earth. They'll therefore be aboard the orbiting lab for a series of big spaceflight anniversaries and milestones.

They'll also bid farewell to NASA's space shuttle program from the orbiting lab. The space agency is retiring the workhorse vehicles later this year after three decades of service. The last two shuttle flights — Endeavour's STS-134 mission and Atlantis' STS-135 flight — are slated to launch toward the station in April and June, respectively.

The three crewmembers already aboard the station — cosmonaut Dmitry Kondratyev, NASA astronaut Cady Coleman and European spaceflyer Paolo Nespoli — have been there since December. They're scheduled to return to Earth next month.

Yuri Gagarin's 1961 flight was a significant victory for the Soviet Union in its escalating space race with the United States. It opened wounds first inflicted by the Soviets' surprise launch of Sputnik 1 — the world's first artificial satellite — in October 1957. [The Top 10 Soviet and Russian Science Missions]

Gagarin launched in a spherical Vostok 1 capsule, orbited Earth once, then landed safely in a Russian field 108 minutes later.

While Gagarin's name will live forever in the history books, the man himself died tragically young. His plane crashed during a military training exercise in 1968, killing the cosmonaut at the age of 34.