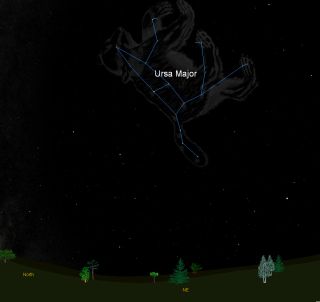 This sky map shows how the constellation Ursa Major, the Great Bear, appears in the night sky from mid-latitudes of North America at about 9 p.m. local time.
(Image: © Starry Night Software)

As the month of April begins, the northeastern U.S. states are experiencing an "Indian Winter" to — a lingering cold season well past the equinox — the way warm weather often hangs on into October, giving us Indian summer. And it seems that even the winter constellations are leaving us somewhat begrudgingly.

As darkness falls, the stars of Orion and his brilliant retinue are still readily visible well up in the southwest sky. And a month from now when it gets dark, those winter stars will still be visible, albeit hanging close to the western horizon.

Not too long thereafter, they will all be gone, reappearing in the eastern sky at the break of dawn in mid-summer.

A big dipper for spring

But as if to compensate for the loss of our brilliant winter stars, nature has provided us with a striking and well-known pattern to gaze at during the evening: the Big Dipper.

The seven stars of the Big Dipper are actually part of larger constellation, but can be easily recognized almost directly overhead at around midnight local time.

While many Americans recognize the ladle-shaped pattern as the Big Dipper, many other cultures regard as some kind of carriage or wheeled vehicle. In the United Kingdom, it's called the Plough.

Regardless of what these seven stars portray to various peoples, to Western civilization they have always been part of the larger Great Bear constellation, which we call Ursa Major.

The stars immediately to the west and south of the bowl of the Dipper form a pretty good stick figure of this creature. Only the bear’s tail, a longish one composed of the three stars that form the Dipper’s handle, is out of place since bears on Earth possess short, stubby ones.

Here’s an aside to our Internet friends who live in below the equator in the Southern Hemisphere: This is the time of year that you’ll get your best views of Ursa Major and the Big Dipper. But instead of appearing overhead, as they do in the Northern Hemisphere, the star patterns are oriented in the northern part of the sky. So the farther south one goes, the lower in the north the star patterns will get.

Probably the most unusual view of the Big Dipper that I ever had was when I led a Halley’s Comet tour to Easter Island in April 1986.

The upside-down Dipper, however, can now be glimpsed as far south as 30 degrees south latitude, which includes many far-southerly locations, such as Johannesburg, South Africa; Asuncion, Paraguay; and Sao Paulo, Brazil.

On page 24 of what I think is one of the very best guides to the constellations, “The Stars – A new way to see them” (available from Houghton-Mifflin Co., Boston), author H.A. Rey sketched a kangaroo with a baby joey in her pouch. The caption reads: “The Dipper? Never seen it …"

However, much of Australia can also see the Dipper now, as about three-quarters of the land area of that country is located above latitude 30 degrees south. But unfortunately, most of that country’s population is distributed below that imaginary line!

Now about that tail …

What is really remarkable about the Big Dipper stars is that in one way or another they’ve always comprised a bear to widely separated early peoples – not only to Old World ancients but to New World Indian tribes as well.

But over the years, in pointing out the Great Bear to audiences either in the Space Theater of New York’s Hayden Planetarium or under the real night sky, I have had to spend a minute or two trying to explain away the Bear’s unusually long tail. Perhaps the most common reason given is the one attributed to the British humorist and poet, Thomas Hood (1799-1845):

Hood wrote (with original spellings): “Imagine that Jupiter, fearing to come too nigh unto her teeth, layde holde on her tayle, and thereby drewe her up into the heaven; so that shee of herself being very weightie, and the distance from the Earth to the heavens very great, there was a great likelihood that her tayle must stretch. Other reason know I none.”